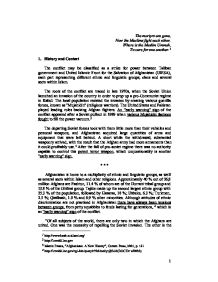 The conflict may be classified as a strike for power between Taliban government and United Islamic Front for the Salvation of Afghanistan (UIFSA), each part representing different ethnic and linguistic groups, clans and several sects within Islam.

The martyrs are gone, Now the Muslims fight each other, Where is the Muslim Ummah, To care for one another.1 1. History and Context The conflict may be classified as a strike for power between Taliban government and United Islamic Front for the Salvation of Afghanistan (UIFSA), each part representing different ethnic and linguistic groups, clans and several sects within Islam. The roots of the conflict are traced in late 1970s, when the Soviet Union launched an invasion of the country in order to prop up a pro-Communist regime in Kabul. The local population resisted the invasion by creating various guerilla forces, known as "Mujahidin" (religious warriors). The United States and Pakistan played leading roles backing Afghan fighters. An "early warning" sign of the conflict appeared after a Soviet pullout in 1989 when various Mujahidin factions fought to fill the power vacuum.2 The departing Soviet forces took with them little more than their vehicles and personal weapons, and Afghanistan acquired large quantities of arms and equipment that were left behind. A short while the withdrawal, substantial weaponry arrived, with the result that the Afghan army had more armaments than it could profitably use.3 After the fall of pro-soviet regime there was no authority capable to control this potent terror weapon, which unquestionably is another "early warning" sign. * * * Afghanistan is home to a multiplicity of ethnic and linguistic groups, as well as several sects within Islam and other religions. Approximately 40 % out of 26,8 million Afghans are Pashtun, 11.4 % of whom are of the Durrani tribal group and 13.8 % of the Ghilzai group. Tajiks make up the second largest ethnic group with 25.3 % of the population, followed by Hazaras, 18 %; Uzbeks, 6.3 %; Turkmen, 2.5 %; Qizilbash, 1.0 % and 6.9 % other minorities. Although attitudes of ethnic discrimination are not practiced in Afghanistan there have always been tensions between groups, from petty squabbles to feuds lasting for generations, 4 which is an "early warning" sign of the conflict. ...read more.

Symptoms a) Attitudes At the first time of the Taliban appearance they were praised as a group of heroes who had replaced violence and social chaos with peace and security in the areas under their domination. The enthusiastic support and allegiance given to Taliban by local people and leaders of entire provinces23 demonstrated a positive attitude towards Taliban and a negative position towards Mujahidin government. b) Behavior The inability of the Mujahidin government to agree upon any lasting political settlement and the Taliban's refusal to hold any dialogue represented a major symptom of the conflict. A violent behavior of both sides as fierce fights for the territorial gains in August and September before the fall of Kabul caused hundreds deaths of government and Taliban fighters. Mediation actions taken by the UN Mission to Afghanistan as peace talks organizations or cease-fire appeals were ignored by both sides. The UN set out in May 1991 an "international consensus" for a peace settlement in Afghanistan, but the plan was turned down flat. In January 1995, a plan to set an interim government failed as well. 5. Dynamics In September 1996, Taliban gained control of the Afghan capital, Kabul. The Taliban final advance on Kabul came after a series of striking military gains in early September, which represented an escalation of the conflict between Taliban and Mujahidin groups. Ousting the government of President Burhanuddin Rabbani, the student religious militia formed a new government and moved swiftly to impose a strict Islamic regime.24 However, it was recognized only by Pakistan. In October, the Taliban came under attack by opposition forces. Attempts at mediation by Pakistan proved futile and a truce between parties was reported to have collapsed.25 The violent tensions continued and in late December the Taliban were reported to have made their major military advance despite a UN attempt in November to broker a cease-fire. The opposition forces were initially composed of 2 major Mujahidin groups: Jamiat-i Islami-yi Afghanistan, where the most powerful figure was Ahmad Shah Massoud, and Junbish-i Milli-yi Islami-yi Afghanistan under the command of Rashid Dostam. ...read more.