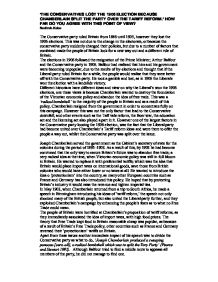 The Conservative party ruled Britain from1886 until 1905, however they lost the 1906 elections.

The Conservative party ruled Britain from 1886 until 1905, however they lost the 1906 elections. This was not due to the change in the electorate, or because the conservative party suddenly changed their policies, but due to a number of factors that combined made the people of Britain look for a new way out and a different rule of Britain. The elections in 1906 followed the resignation of the Prime Minister; Arthur Balfour and the Conservative party in 1906. Balfour had realised that him and his government were becoming unpopular, due to the results of by-elections and thought that if the Liberal party ruled Britain for a while, the people would realise that they were better off with the Conservative party. He took a gamble and lost, as in 1906 the Liberals won the election with a landslide victory. Different historians have different ideas and view on why the Liberal's won the 1906 elections, one these views is because Chamberlain wanted to destroy the foundation of the Victorian economic policy and abandon the idea of free trade. This was a 'radical bombshell' to the majority of the people in Britain and as a result of this policy, Chamberlain resigned from the government in order to concentrate fully on this campaign. ...read more.

However this alone is not what causes many Historians to think that Balfour was a bad choice for Prime Ministers, other factors, such as his education act, the Taff Vale judgement and the issue of Chinese slavery also contributes to this. In 1902 Balfour introduced the education act, which allowed voluntary school, which were usually religious schools such as Church of England to be funded by local taxes. It abolished school boards and introduced Local Council Education Committees that were to run schools instead. The problem with this, was that the non-conformists, found the idea that religious schools could be run out of the taxes that they paid offensive. Non-conformists always objected to special privileges of the Church of England. This was supported by the Liberal party, which created more support for the Conservatives opposition. During the Boer war, the Taff Vale railway company in South Wales refused to grant wage increases to its workers despite the increased profit due to the war. It was asked for theses wage increases by the ASRS trade union, however the Taff Vale Company refused to recognise their right to bargain for a pay rise and the union called a strike. ...read more.

Although all these issues were key to the downfall of the Conservative party, I think that it was 'the Boer war (1899-1902) proved to be the catalyst for change' (Lee 1994). The Boer war caused many of the issues that combined made the Conservatives loose the 1906 election. If it wasn't for the Boer war, the 'Taff Vale' incident would never have happened as there would not have been the demand for the increase in the railway industry that made the ASRS want a wage increase for it's members. It also would not have resulted in a shortage of workers in South Africa, causing the 'Chinese Slavery' incident, or the after-effects of the Boer War, such as the Liberal Part re-grouping would not have happened. Finally, Chamberlain's ideas of 'Tariff Reforms,' only came into play because of the sense of unity he thought that the British Empire should contain to be strong. If the Boer war had not happened, the emotional bonds fostered by it would not have been there to convince Chamberlain that the opportunity to strengthen links within the Empire were there to be seized. 'THE CONSERVATIVES LOST THE 1906 ELECTION BECAUSE CHAMBERLAIN SPLIT THE PARTY OVER THE TARIFF REFORM.' HOW FAR DO YOU AGREE WITH THIS POINT OF VIEW? Nadirah Kaba ...read more.