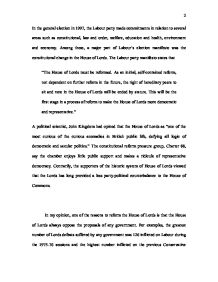 The constitutional change in the House of Lords

In the general election in 1997, the Labour party made commitments in relation to several areas such as constitutional, law and order, welfare, education and health, environment and economy. Among these, a major part of Labour's election manifesto was the constitutional change in the House of Lords. The Labour party manifesto states that "The House of Lords must be reformed. As an initial, self-contained reform, not dependent on further reform in the future, the right of hereditary peers to sit and vote in the House of Lords will be ended by statute. This will be the first stage in a process of reform to make the House of Lords more democratic and representative." A political scientist, John Kingdom had opined that the House of Lords as "one of the most curious of the curious anomalies in British public life, defying all logic of democratic and secular politics." The constitutional reform pressure group, Charter 88, say the chamber enjoys little public support and makes a ridicule of representative democracy. Contrarily, the supporters of the historic system of House of Lords viewed that the Lords has long provided a less party-political counterbalance to the House of Commons. In my opinion, one of the reasons to reform the House of Lords is that the House of Lords always oppose the proposals of any government. For examples, the greatest number of Lords defeats suffered by any government was 126 inflicted on Labour during the 1975-76 sessions and the highest number inflicted on the previous Conservative administration was twenty-two defeats during the 1985-86 sessions. This would obstruct the administration and management of government. Besides, the present House of Lords suffers from a lack of legitimacy because of its anachronistic and unrepresentative composition. Thus, the Government is committed to improving the effectiveness and balance of the House of Lords, with the aim of it playing a full and proper part in Parliament. ...read more.

Besides, the vast majority of the public is against a second chamber, which dominated by appointees rather than directly elected representatives. This is because there would still have the problem of lack legitimacy without a direct election. However, in my opinion, the balance in composition could make the upper house become more representative and democracy and plays an effective role. Since the Commission would create an upper House which is 'authoritative, confident, and broadly representative of the whole of British society'. Its members would have experience, skill and knowledge relevant to the assessment of constitutional matters. In November 2001, the government published White Paper, The House of Lords - Completing the Reform. The White Paper it produced was basically along the lines with the visions of Wakeham Report. The Government will welcome responses to this White Paper by 31 January 2002. The White Paper stated that the new second chamber would act as constitutional checks and balances to the House of Commons and retain its current power. It would have no veto over government legislation but has the power to delay government legislation for three months. However, the functions of the reformed must also be renewed whilst maintain the higher status in the legislative process. In order to balance the power of the Executive, the second chamber should have the power of delay for one year. Therefore, the government still has time to reconsider about the effect of the enactment of such legislation or redress the defects or inadequate in that Bill. The Government proposes only one change to the formal powers of the House of Lords in relation to Secondary legislation. At present, the House of Lords only has the power to approve or reject a Statutory Instrument. This crude power is inconsistent with the Lords' primary role as an advisory and revising chamber. Therefore it accepts the Royal Commission's recommendation that the House of Lords should be given a power to require the Commons to consider or reconsider Statutory Instruments. ...read more.