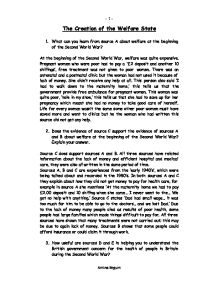 The Creation of the Welfare State

The Creation of the Welfare State 1. What can you learn from source A about welfare at the beginning of the Second World War? At the beginning of the Second World War, welfare was quite expensive. Pregnant women who were poor had to pay a '�2 deposit and another 10 shillings', free treatment was not given to poor women. There was an antenatal and a postnatal clinic but the woman had not used it because of lack of money. She didn't receive any help at all. This person also said 'I had to walk down to the maternity home,' this tells us that the government provide free ambulance for pregnant women. This woman was quite poor, 'hole in my shoe,' this tells us that she had to save up for her pregnancy which meant she had no money to take good care of herself. Life for every woman wasn't the same some other poor women must have saved more and went to clinics but he the woman who had written this source did not get any help. 2. Does the evidence of source C support the evidence of sources A and B about welfare at the beginning of the Second World War? Explain your answer. Source C does support sources A and B. All three sources have related information about the lack of money and efficient hospital and medical care, they were also all written in the same period of time. ...read more.

The children were so badly clothed when they arrived and very dirty. Some children also have difficulty keeping themselves clean. Many children had lice and other hygiene related diseases. This subject of filthiness had a major impact on both hosts and evacuees, host had trouble teaching evacuees the right way of things and evacuees found it difficult to lead a different lifestyle. Some of the evacuees had a major culture shock when they saw how the hosts live in a much cleaner environment the fact that there was clean running water had amazed many evacuees. This was going to be a very exciting. Source G has positive impacts of the evacuation "one small girl was so chubby that she needed a larger size of gas mask". This was very interesting because there were only bones when they had been evacuated and this was an absolute transformation "some children from poor areas have become unrecognisable within a few weeks". This quote is also from source G, this source is a part of a letter written during the war by a woman who accepted evacuees. This evacuation did have quite a few advantages for example the children had come to know more about nature and were taught how to live the right way, this had also made them much more healthier than before and the fresh air was very good for their health. There was a major clash in the social classes but they managed to mix. ...read more.