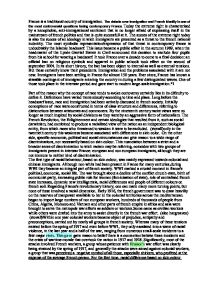 The debate over immigration and French identity is one of the most controversial questions facing contemporary France.

France is a traditional country of immigration. The debate over immigration and French identity is one of the most controversial questions facing contemporary France. Today the extreme right is characterised by a xenophobic, anti-immigrational sentiment that is no longer afraid of expressing itself in the mainstream of french politics and that is quite succesfull at it. The succes of the extreme right today is also the succes of an ideology in wich immigrants are presented as a threat to the french national indentity. The most symbolic representation/expression of that threat in contemporary france is undoubtably the Islamic headscarf. This issue became a public affair in the autumn 1989, when the headmaster of the Lyc�e Gavriel Havez in Creil announced ihis decision to exclude four pupils from his school for wearing a haedscarf. It took France over a decade to come to a final decision: an official ban on religious symbols and apparrel in public schools took effect on the second of september 2004. In its short history, the ban has been object to internal as well as external tensions. But these certainly know their precedents. Immigration and the problems associated with it are not new. Immigrants have been settling in France for almost 150 years. Ever since, France has known a sizeable contingent of immigrants entering the country in during a few distinguished waves. One of those took place in the interwar period and gave start to modern large-scaleimmigration.*1 Part of the reason why the concept of race tends to avoke contoversy certainly lies in its dificulty to define it. Definitions have varied tremendously according to time and place. Long before the headscarf issue, race and immigration had been actively discussed in french society. Initially conceptions of race were constructed in terms of class structure and differences, referring to disticnctions between aristocrats and commoners. By the nineteenth century racist views were no longer as much inspired by social divisions as they were by an aggressive form of nationalism. ...read more.

The attempt of the Extreme Right to exploit these tensions wasn't quite surprising, but even the PCF, the french communist party, and the CGT, the non-communist trade union, requested the reduction of foreign labour and yhe priority of french workers. Only few people are willing to stand up against these old accusations, being the french employer, the economic benefitair of foreign immigration, and certain members of the Left wich appoints the system of capitalism instead of foreign labour as responsible for the crises. Nevertheless these groups gaine less sympathie for their arguments and soon after 1931 measrues are taken to restrict the acces of foreign labour into the franch labour market, soon followed by repatriations. ???????? Anxiety wasn't solely economically inspired, the danger of political difficulties in the early thirties seemed very real to french society. Obviously the notion of foreigners as a threat to the political status quo was not new. Fears of a widespread distribution of fascist ideology through italian residents had been present ever since Mussolinis victory in 1922. However the scale of the problem expanded. The early thirties stood for an intensifacation of repression in European dictatures, prosecutions of jewish population, the imperialistic attitudes of fascist Italy and The Third Reich and the triumph of Franco in Spain. Political violence and extremism brought many of its victims to France amongst other countries. Schor 123) France, considering itself as an asylum for political refugees, did honour to its reputaion and widely opened its fronteres. However, this attitude of generosity changed, as new immigrants brought about new problems. Inhabitants of Austrie, Sarrois and Czechoslovaqie represented marginal groups in France and consequently they were granted little attention. Other victims of german imperialism that turned to france were less fortunate. The increasing presence of jews struck deep roots in interwar France and fuelled the anti-semitic propaganda, which was not a new phenomen. Earlier on, France had experienced the Dreyfus-affair, wich can be seen an anti-Jewish campaign, that aroused a wave of hathred in the 1890s. ...read more.

A great part of this discriminative behaviour can be interpretated as an attempt to secure ist own political and economic position. One exeption is to be made considering the intolerance towards jews, which had to face hathred and racism, based on religious and cultural grounds, and therefore can be defined as antisemitic acts. The discriminations against jews can simply not be explained as an attempt to secure its position in scoiety as jews never posed a greater threat than any other population, not in an economical neither in a political way. Finally racist doctrines were carried out by pronatalists, concerned with the continuing fall of France's birth rate. The impulse to racial hierarchicalisation, categorising races on the bases of their assimiliability, or in other words their resemblance to the french race, can certainly be identified as acts of racism. It must be taken in consideration that immigration policies didn't realy had an extenuating effect on the situation. Maybe, more than economic and demographic factors, policies shaped the size of antagonism and social opposition towards this new component of french society. Immigration policy was never driven by any other ideology than opportunism. Immigrants were to serve their host countrys war effort as well as its economic and demographic growth, but were only seldom protected by the french government. Racial attacks were never convicted but answered by an unsufficient policy of separation, eonomic protection was outlawed as immigrants didn't reserve the right to unionise themselves and an improvement in living conditions was not likely to happen as they weren't granted a political voice. Ofcourse policies work in both ways, they are just as much influenced by the public opinion as they are instigating the frenh population. Although the latter was certainly discriminative and exclusionist, one can conclude that they were not more prone to discrimination or racism, than any other population, as racial attacks, anti-semitism, the Great depression, and in a lesser extent demographical concerns, affected a great part of Europe. But it might be expereinced more shocking in french society when one consideres its republican tradition. ...read more.