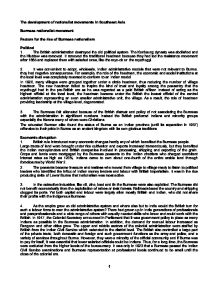 The development of nationalist movements in Southeast Asia

The development of nationalist movements in Southeast Asia Burmese nationalist movement Factors for the rise of Burmese nationalism Political 1. The British administration destroyed the old political system. The Konbaung dynasty was abolished and the Hlutdaw was removed. It removed the traditional headmen because they had led the resistance movement after 1885 and replaced them with salaried ones, like the myo-ok or the myothugyi. 2. It was convenient to adopt, wholesale, Indian administrative models that were not relevant to Burma. they had negative consequences. For example, the role of the headman, the economic and social institutions at the local level was completely reversed to conform to an Indian model In 1920, many villages were grouped together under a circle headman, thus reducing the number of village headmen. The new headmen failed to inspire the kind of trust and loyalty among the peasantry that the myothugyi had in the pre-British era as he was regarded as a paid British officer. Instead of acting as the highest official at the local level, the headman became under the British the lowest official of the central administration representing an even smaller administrative unit, the village. As a result, the role of headman providing leadership at the village level, degenerated. 3. The Burmese felt alienated because of the British distrust and policy of not associating the Burmese with the administration in significant numbers. Instead the British preferred Indians and minority groups especially the Karens many of whom were Christians. The educated Burman elite found the status of Burma as an Indian province (until its separation in 1937) offensive to their pride in Burma as an ancient kingdom with its own glorious traditions Economic disruption 1. British rule introduced many economic changes hardly any of which benefited the Burmese people. Large tracts of land were brought under rice cultivation and exports increased tremendously, but they benefited the Indian moneylenders and British companies involved in processing, shipping and exporting of the grain. ...read more.

5. In 1919, the Sarekat Islam was infiltrated by the Socialist elements or the Indies Socialist Democratic Club (ISDV - 1912 and founded by Hendrik Sneevliet) which made the Sarekat Islam a more politically active and militant party. In 1920, the ISDV leaders, Samuan and Tan Malaka tried unsuccessfully to gain control of the Trade Union Central which was a federation of 22 trade unions formed by Sarekat Islam. In 1921, Samaun formed a rival association of trade unions, the Revolutionary Trade Union Central and in the process was able to detach considerable strength from Sarekat Islam's Trade Union Central. 6. By 1920, Samaun and Tan Malaka insisted that the Sarekat Islam come out openly as a political party with a radical and revolutionary programme for the overthrow of Dutch rule and the establishment of a socialist state. In 1920, the Socialists broke away from the Sarekat Islam to form the Partai Kommunis Indonesia (PKI). In 1921, the Sarekat Islam passed the Surabaya Resolution which expelled the Socialists from the party. 7. In 1923, the Sarekat Islam changes its name to Partai Sarekat Islam (PSI) and in the same year it adopted non-cooperation tactics by not participation in the Volksraad. It became more interested in an active Islamic programme as it was influenced by the teachings of Mohd. Abduh from the University of Cairo (Islamic Reformist Movement). It held congresses and gained some support from the masses. 8. By 1927, PSI lost influence to Sukarno's Partai Nasional Indonesia (PNI) as by then the western educated elite found Islam to be an insufficient factor in the nationalist cause. The members drifted away to join other parties and this probably explains why the Dutch government did not apply any harsh measures in spite of its non-cooperative stand. 9. The ultimate significant feature of Sarekat Islam lies in its position as a training ground for a small group of Islamic leaders who would play an active role in the political arena where Islam was at a disadvantage. ...read more.

In 1937, the SMU formed branches in Malacca and Penang and Malay associations were also formed in other states. A Brotherhood of Pen Friends (Persaudaraan Sahabat Pena) was formed in 1937. It examined political affairs and especially the position of the Malays. In the same year, the Kesatuan Melayu Muda (Malay Youth Union) was organised. It was a radical party and it neither expressed loyalty to the sultans and the British nor spoke of non-cooperation but it worked to promote nationalist feelings and teachings among its members, whose strength lay in the lower classes. A Pan-Malayan Conference of Malay state associations met in Kuala Lumpur in August 1939 to attempt to unite Malay groups together in a single movement, but the effort failed. However, it laid the foundation for the formation of another political organisation, the United Malays National Organisation (UMNO) formed in 1946. Chinese nationalism To the Chinese, the colonial administration provided the conditions and the opportunities for a large-scale economic development and thus they were not encouraged to dispute British authority. They had their objections against what they experienced as discrimination, against the Malay 'special rights' and against the Malay claims that Malaya was a Malay country, but as long as they were allowed to work in the economic field without interference, they hardly showed an interest in Malaya's political development and they did not consider their complaints a sufficiently strong motive to oppose the colonial regime. Indian nationalism Similar considerations conditioned the attitude of the Indians, who were, as a group, not important enough, numerically, to tip the scales and who were more interested in the political activities of the Indian National Congress' efforts to gain independence for India. Hence, democracy, popular representation and independence were hardly an issue in Malaya and if there happened to be a few intellectuals mostly Eurasians, sometimes, Chinese who diffidently brought up these matters for discussion, they did not meet with any response from among either the population in general or the leading personalities in public life. ...read more.