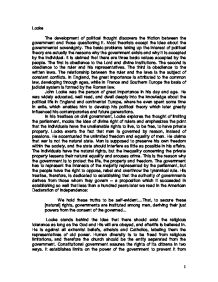 Locke The development of political thought discovers the friction between the government and those questioning it. Most theorists accept the idea about the governmental sovereignty. The basic problems taking up the interest of political theory are actually the reasons why the government exists and why it is accepted by the individual. It is claimed that there are three basic values accepted by the people. The first is obedience to the Lord and divine institutions. The second is obedience to the ruler and his representatives. The third is obedience to the written laws. The relationship between the ruler and the laws is the subject of constant conflicts. In England, the great importance is attributed to the common law, developing through ages, while in France and Southern Europe the basis of judicial system is formed by the Roman law. John Locke was the person of great importance in his day and age. He was widely educated, well read, and dwell deeply into the knowledge about the political life in England and continental Europe, where he even spent some time in exile, which enables him to develop his political theory which later greatly influenced his contemporaries and future generations. ...read more.

So did the many immigrants who came to America to seek a better life. Those who are born here have implied their consent by remaining in this country and living under its laws. Every native-born American, as he or she grows up, has the choice of seeking the citizenship of another country. By remaining in this country, accepting its laws, and enjoying its benefits, they imply their consent to be governed by the federal, state, and local governments. They also affirm their consent every time they take the Pledge of Allegiance, participate in an election, or engage in other civic actions. What Locke has to say about the origin of civil society is also of interest in connection with the concept of property. It is apparent that property is very important in Locke's political theory. He says that the law of nature commands one not to harm another's possessions; and he also says that men enter into society in order to preserve more perfectly their liberty and property. Thus the right to property is protected both by the law of nature and the civil law; in fact, one of the reasons for the existence of civil society is the preservation of property. ...read more.

No American can ever afford to forget this basic truth. The reading of Locke's essay will never permit him to. In retrospect, his views on citizens' rights and constitutionalism are a curiously double-edged sword. One of the jobs that Locke undertook was in preparing the articles for the settlement of Virginia in North America. The articles he drafted were extremely liberal and democratic, drawing heavily on his views on rights, toleration and constitutional government. These articles were in stark contrast to the puritan absolutism of colonies farther North and also to the almost feudal oligarchy of the aristocratic landowners farther South (who became the ante-bellum slave owning gentry we see in every movie about the American Civil War). The constitution of Virginia became an extremely important influence on the framers of the Constitution of the United States and as a result Locke has had an enormous practical influence on the development of liberal and democratic thought in the modern age. Conversely his ideas about sovereignty and the rights of property were also very influential in the colonial age. Because the states that emerged from this colonial era have received much of their law and constitutional doctrine from the Law of Nations in the Age of Empires the way in which settler-indigenous were and are carried on have been shaped by Locke's thought. This is not necessarily a good thing. ...read more.