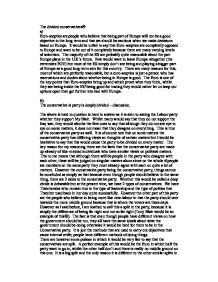 The divided conservatives:( a) Euro-sceptics are people who believe that being part of Europe will not be a good objective in the long term and that we should be cautious when we make decisions based on Europe. It would be unfair to say that Euro-sceptics are completely opposed to Europe and want to be out of it completely because there are many varying levels of scientism. The majority of the ES are probably quite reasonable about the part Europe plays in the U.K's future. Few would want to leave Europe altogether (the extremists POV) but most of the ES simply don't see being and playing a bigger part of Europe as a good long-term aim for this country. There are many reasons for this, most of which are perfectly reasonable, but a euro-sceptics is just a person who has reservations and doubts about whether being in Europe is good. The Euro is one of the key points that Euro-sceptics bring up and which prove what they think, whilst they see being inside the EU being good for trading they would rather let us keep our options open than get further into bed with Europe. ...read more.

This to me means that although there will be people in the party who disagree with each other, these will be judged on singular matters alone since on the whole if people are members on the same party they must already agree with each on quite a lot of matters. However the conservative party being the conservative party, things cannot be concluded as simply as that because even though people should believe in the same thing, there are 2 sides to the conservative party. Whether this would be called a deep divide is debatable but at the present time, we have 2 types of conservatives. We have Thatcherates who remain true to the type of leadership and the type of politics that Thatcher used back in her day quite successfully. However the other part of this party are the people who believe in being more like new-labour in that the party should veer towards the more middle ground because that is where the voters are these days. ...read more.

This is not so for the conservatives which means that on topics where disagreements happen, there is often no one who can mediate it, unlike in the other parties. However as I have said, I don't really think that the conservative party has a very deep divide in it. Propel have different views on certain matters and at the moment without a strong leaders these different factions are arguing with one another which creates the allusion of a deep divide. But as I said before, the MP's in the Conservative party all believe in mostly the same thing and any splits that are evident are only splits in specific bits of policy rather than a big split on everything. Conservatives have different ways of doing things depending on how far right they are but in the end they all believe in most of the same things, sometimes it is just the way things are done in which people argue about. ...read more.