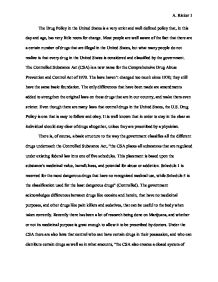 The Drug Policy in the United States is a very strict and well defined policy that, in this day and age, has very little room for change. Most people are well aware of the fact that there are a certain number of drugs that are illegal in the United States, but what many people do not realize is that every drug in the United States is considered and classified by the government. The Controlled Substance Act (CSA) is a new name for the Comprehensive Drug Abuse Prevention and Control Act of 1970. The laws haven't changed too much since 1970; they still have the same basic foundation. The only differences that have been made are amendments added to strengthen the original laws on these drugs that are in our country, and make them even stricter. Even though there are many laws that control drugs in the United States, the U.S. Drug Policy is one that is easy to follow and obey. It is well known that in order to stay in the clear an individual should stay clear of drugs altogether, unless they are prescribed by a physician. There is, of course, a basic structure to the way the government classifies all the different drugs underneath the Controlled Substance Act, "the CSA places all substances that are regulated under existing federal law into one of five schedules. ...read more.

Another main concern of those who support the drug policy in the U.S. is their fear that if these harmful drugs were not illegal, the country would be much worse off. They acknowledge the fact that "the affects of harmful drugs like cocaine and heroin, are much worse then those of alcohol and tobacco" (U.S. Drug). The supports argue the point that this country already has enough problems trying to control the use of alcohol and tobacco, and to let these even more harmful drugs be legal on the streets would be nothing short of madness. They believe that if we, as a country, are not able to control drinking and driving problems, as well as over usage of tobacco products causing cancer in the masses, there is no way we would be able to control the effects that stronger and more harmful drugs would have on the people of this country. A third aspect of the act that supporters stand by is the idea of increased enforcement. They believe that the stricter the laws and more they are enforced the better the results will be. Again supporters depend on the fear that people have of being caught and paying the consequences. The worse the consequences are for drug offenders, the less likely they are to break the laws. ...read more.

I have seen first hand the consequences that come with being involved in drugs after growing up in a small city very close to the border, Yuma, Arizona. I have seen one too many young teenagers and adults as well ruin their lives for drugs, and though I acknowledge the arguments of those who are opposed to the strict drug laws, I still believe that even if the drugs were legalized they would still be ruining lives. That fact is undeniable to me, and though alcohol and tobacco are harmful also, they don't impair the human mind the way that these stronger and more harmful drugs do. The human mind is impacted so strongly by drugs like cocaine, heroin, and marijuana and these drugs are so addicting that to legalize them would be, in my opinion, to throw away the great minds of this country by the masses. I agree with the supporters of the Controlled Substance Act, U.S. Drug Policy, and strict laws against drugs in the United States. I believe that the policy is more then worth while, it is essential. This is one form of government intervention that I believe is necessary. I think that we should, as a country, continue to look for new ways to strengthen and enforce these laws because keeping these drugs out of our country is very important and it will help us to stay a stronger, smarter, healthier, and more alert country as a whole. ...read more.