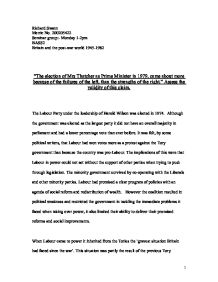 &quot;The election of Mrs Thatcher as Prime Minister in 1979, came about more because of the failures of the left, than the strengths of the right.&quot; Assess the validity of this claim.

Richard Swann Metric No. 200205422 Seminar group:- Monday 1-2pm BASS2 Britain and the post-war world 1945-1982 "The election of Mrs Thatcher as Prime Minister in 1979, came about more because of the failures of the left, than the strengths of the right." Assess the validity of this claim. The Labour Party under the leadership of Harold Wilson was elected in 1974. Although the government was elected as the largest party it did not have an overall majority in parliament and had a lower percentage vote than ever before. It was felt, by some political writers, that Labour had won votes more as a protest against the Tory government than because the country was pro-Labour. The implications of this were that Labour in power could not act without the support of other parties when trying to push through legislation. The minority government survived by co-operating with the Liberals and other minority parties. Labour had promised a clear program of policies with an agenda of social reform and redistribution of wealth. However the coalition resulted in political weakness and restricted the government in tackling the immediate problems it faced when taking over power, it also limited their ability to deliver their promised reforms and social improvements. ...read more.

It was forced to sell off its profitable shares in companies such as British Petroleum, to pay its foreign debts This led to a fall in support for the government. The government was forced to take out a loan with the International Monetary Fund to borrow their way out of trouble. In March 1975 the defeated Conservative government held a ballot for the election of the party leader; this was won by Margaret Thatcher. Although this pleased the Labour party, who did not see her as a major political threat, she had very strong views on the economy and the role of government. Mrs. Thatcher was in favour of a move away from the traditional Conservative politics of Social Democracy to a pro-Free Market Economy. This policy was against government intervention or attempt to regulate industry and she was extremely critical of Labours economic strategy and attacked the State and inefficient public industry. Although the governments anti inflationary policies had some effect and there was a slight improvement in the countries economic situation, this was not enough to stop the move away from government support. .At this time the media especially the newspapers were overwhelmingly anti-labour and anti-union, especially the Sun which was under the management of Rupert Murdoch. ...read more.

The S.N.P. withdrew its support and passed a vote of no confidence. Callaghan was forced to call a general election for May 3rd. In conclusion the election was lost by the failure of the left to deliver its promises of social reform and redistribution of wealth. The Labour government was over optimistic about their ability to control the economic situation they inherited. They came to power during a world wide recession which also affected many other countries. This meant there was no market for exports and the economy suffered. Labour came to power with a minority government this coupled with the divides in the party had an effect on their ability to implement policy. Their administration was not all bad, for the poorer in society housing and welfare support had improved. For the majority of the parliament the Unions stuck to wage restraints and the economy was beginning to recover. However the Labour party failed to get this message across to the majority of voters. Television coverage dominated the campaign leading up to the 1979 election. The Conservatives exploited this to reinvent themselves as the party of modernisation and pro-enterprise while emphasising the failures of the left. However it was these failures that were the strongest influences on voting behaviour and resulted in the change in government. ...read more.