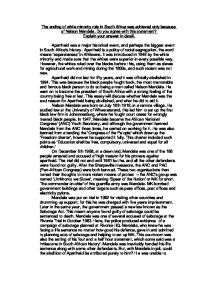 The ending of white minority rule in South Africa was achieved only because of Nelson Mandela. Do you agree with this statement? Explain your answer in detail. Apartheid was a major historical event, and perhaps the biggest event in South Africa's history. Apartheid is a policy of racial segregation, the word means 'separateness' in Afrikaans. It was introduced in 1948 by the white minority and made sure that the whites were superior in every possible way. However, the whites ruled over the blacks before this, using them as slaves for agricultural work and mining during the 1800s, and such racism was not new. Apartheid did not last for fifty years, and it was officially abolished in 1994. This was because the black people fought back, the most memorable and famous black person to do so being a man called Nelson Mandela. He went on to become the president of South Africa with a strong feeling of the country being free at last. This essay will discuss whether Mandela was the soul reason for Apartheid being abolished, and what he did to aid it. Nelson Mandela was born on July 18th 1918, in a remote village. He studied law at the University of Witwatersrand, this led him to set up the first black law firm in Johannesburg, where he fought court cases for wrongly treated black people. In 1947, Mandela became the African National Congress' (ANC) Youth Secretary, and although the government banned Mandela from the ANC three times, he carried on working for it. ...read more.

The government was forced to impale itself on its own sword - it undermined apartheid laws and gave black people the jobs that they had previously been banned from. Blacks realised that this gave them more power to bargain for better conditions and higher wages. Between 1973 and 1975, illegal black trade unions even went on widespread strikes! Vorster became uneasy and unsettled about this new-found power and so he set up two investigations - the Riekert and Wiehahn Commissions, to find out about the strikes and shortage of labour. This proved to be a big mistake, as in 1979 they recommended ditching the laws that reserved jobs for white people and also legalising African trade unions. By changing these laws, the government itself started the downfall of apartheid. In 1973, Vorster made the biggest mistake of his career - The Muldergate scandal. This scandal was a huge scale 'propaganda war' to make apartheid look good and silence critics in South Africa. It took its name from the supporter of the plan - Dr Connie Mulder (Vorster's Minister of Information). In total it cost the South African government 64 million rand (�40 million), this was spent on bribes, projects and more bribes. South African tax payers money was used to buy shares in an international news agency and to buy newspapers and magazines in South Africa, the USA, Norway, Britain, France and Germany. This way the government could control what was said in this media and published apartheid propaganda. Much money was spent on bribing politicians in the USA, Britain, Japan and the Seychelles. ...read more.

His ways earned him much respect from white people and black people, and in 1961 he was given the Nobel Peace Prize. Also, a Father Trevor Huddleston who was a white priest who worked in a black township between 1944 and 1956. He fought relentlessly for the rights of black people, and because he was so outspoken he was in constant conflict with the government and the police. He brought the attention of the world to the disgusting happenings in South Africa in a book about his experiences called Naught for your Comfort. Women also took part in the struggle to end apartheid. Margaret Ballinger and Helen Suzman were two white women who worked hard against apartheid. Lillian Ngoyi and Helen Jospeh organised a rally against apartheid, which 20,000 women joined. Therefore, apartheid cannot be attributed to one person, as many helped to finally shut down apartheid. Like Mandela, F.W. de Klerk may have played a vital role in this, but the ending of apartheid was clearly not just down to him. In conclusion to this essay, I disagree that the ending of Apartheid could be purely attributed to Mandela. I believe that all the factors discussed in this essay added together to end apartheid and if one was removed then it might not have happened when it did. African Nationalism helped the white governments to be replaced with black governments, and helped black people to join major organisations such as the UN. Also, I believe that African Nationalism strongly influenced Mandela and many others. Therefore, this leads me to conclude that African Nationalism may have been the most important reason to ending apartheid, but without all of the other reasons, it may not have been so effective. ?? ?? ?? ?? ...read more.