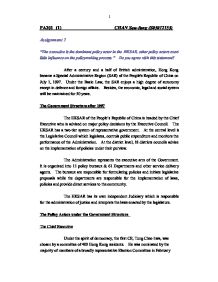 The executive is the dominant policy actor in the HKSAR, other policy actors exert little influence on the policymaking process.-&gt; Do you agree with this statement?

PA201 (1) CHAN Sau-fung (S05012153) Assignment 1 "The executive is the dominant policy actor in the HKSAR, other policy actors exert little influence on the policymaking process." Do you agree with this statement? After a century and a half of British administration, Hong Kong became a Special Administrative Region (SAR) of the People's Republic of China on July 1, 1997. Under the Basic Law, the SAR enjoys a high degree of autonomy except in defence and foreign affairs. Besides, the economic, legal and social system will be maintained for 50 years. The Government Structure after 1997 The HKSAR of the People's Republic of China is headed by the Chief Executive who is advised on major policy decisions by the Executive Council. The HKSAR has a two-tier system of representative government. At the central level is the Legislative Council which legislates, controls public expenditure and monitors the performance of the Administration. At the district level, 18 districts councils advise on the implementation of policies under their purview. The Administration represents the executive arm of the Government. It is organized into 11 policy bureaux & 61 Departments and other service delivery agents. The bureaux are responsible for formulating policies and initiate legislative proposals while the departments are responsible for the implementation of laws, policies and provide direct services to the community. ...read more.

The organizers of the July 1 demonstration used the slogan "Against Article 23, return power to the people" to capture the aims of the demonstration. "Against Article 23" is a very concrete and clear goal. "Return power to the people" seems to be relatively more abstract. However, given the political situation in Hong Kong, "return power to the people" can be understood as involving an opposition to ex-Chief Executive Tung Chee-hwa's administration. He attempted to force the legislation on this issue despite strong opposition from the society and the Tung administration is not compatible with the common interests of Hong Kong people. The Executive has the power to govern, but it has no votes in the Legislature. The Legislators possess the votes to support or veto a Government Proposal, but they have no power to initiate action. At present, there are 60 members in the Legislative Council with 24 members returned by geographical constituencies through direct elections, 30 members by functional constituencies and six members by an election comprising 800 elected representatives of the community. The composition is discordant and factional with no majority party and no clear positioning. The governing power remained vested in the hands of the executive and that is the reason why Hong Kong has an executive-led Government, with the legislature only providing the check and balance. ...read more.

opinions and attitudes of the particular sections of society likely to be affected by any policy before the detailed drafting of a bill takes place. Hence, the government can anticipate and foresee the problems and if possible, to find out the solutions before the proposal is enacted into law. Conclusion Given the relations of the HKSAR government and its sovereign state, the China, most of the policy introduced actually relied on the jurisdiction of the sovereignty and the degree to which the Central Government in Beijing could exercise a high a degree of self-restraint. Moreover, taking into the consideration of the relationship between the Chief Executive and the government legislative structure and well as the composition of the Legislative Council, all of these supports an executive- dominate government. The Executive is the dominant policy actor in the HKSAR whereas other policy actors exert little influence on the policymaking process. PA201 (1) CHAN Sau-fung (S05012153) Reference: (1) Public Management & Administration (an introduction), Owen E. Hughes (2) The government and politics of HK (5 th edition), Norman Miners (3) Political Development of HK Programme: http://www.cuhk.hk/hkiaps/POLITICA/pol10.htm (4) Pick the top 10 government events of the year: http://www.wenweipo.com/special/topten2004/e-index.html (5) Report on the HK electoral system: http://www.democracy.org.hk/pastweek/dec13_19/hrm_report.htm (6) The government of HKSAR: http://www.emb.gov.hk/ (7) Policy research and think tanks: http://www.hkpri.org.hk/bulletin/1/anthony.html ?? ?? ?? ?? 1 ...read more.