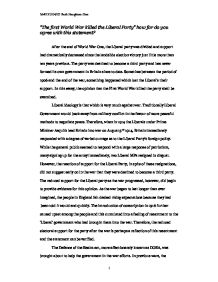 &quot;The first World War killed the Liberal Party&quot; how far do you agree with this statement?

"The first World War killed the Liberal Party" how far do you agree with this statement? After the end of World War One, the Liberal party was divided and support had dramatically decreased since the landslide election victory just little more than ten years previous. The party was destined to become a third party and has never formed its own government in Britain since to date. Sometime between the period of 1906 and the end of the war, something happened which lost the Liberal's their support. In this essay, the opinion that the First World War killed the party shall be examined. Liberal ideology is that which is very much against war. Traditionally Liberal Government would back away from military conflict in the favour of more peaceful methods to negotiate peace. Therefore, when in 1914 the Liberals under Prime Minister Asquith lead Britain into war on August 3rd 1914, Britain immediately responded with a degree of varied outrage as to the Liberal Party's foreign policy. While the general public seemed to respond with a large response of patriotism, many signing up for the army immediately, two Liberal MPs resigned in disgust. However, the reaction of support for the Liberal Party, in spite of these resignations, did not suggest early on in the war that they were destined to become a third party. ...read more.

Therefore, the difference in opinion began to make the party inefficient and also therefore weak. This weakness was highlighted to the general public in May 1915 when The Times published an article blaming the government for the shortage of shells on the Western Front. Asquith's inability to run a war smoothly was therefore questioned not only by MPs but also by the public (electorate), and many devout Liberals became disappointed and anxious about the competence of their leader. The lack of confidence in Asquith because of certain faults that revealed themselves during the war times perhaps helped to kill the Liberal Party and therefore, there is evidence that supports the statement that the First World War killed the Liberals. The incompetence of Asquith to run a war smoothly was a very important aspect that helped to kill the Liberals, even more so than DORA because DORA did not create two separate groups within the party with strong opposing views, just caused mere tension. If Asquith had been more competent in war, the public may have given the government more support because the war may have been more successful. Having considered this however, Asquith did manage to reverse his lack of public support by forming a coalition with the Conservatives and Labour. ...read more.

This was the biggest issue during the First World War because it actually resulted in the Liberals being ousted from power, having being in power for the last time ever. Asquith's failure to let compromise with Lloyd-George and Bonar Law resulted in him being removed from power, and this is the reason for the decline of the Liberals because once out of power, Asquith was susceptible to great criticism and he was unable to defend himself. To conclude, the feud between Asquith and Lloyd-George went on to destroy the Liberals, and this feud came about only because of the First World War. If the first World War had not come about then Asquith would never have been highlighted as a bad leader and a coalition or compromise of Liberalism would never have had to taken place. This would have meant public support would not have been lost. Therefore, because there was only a limited decrease in support for the Liberals before 1914, and by the end of 1918, they were irrepairably destroyed, gaining only 28 seats compared to Lloyd-George with the conservatives who gained 526 MPs, it can be concluded that the First World War killed the Liberal Party. ? Lloyd-George and a group of Liberal MPs believed they had no choice but to concentrate all efforts on winning the war, even if it meant acting 'illiberally'. They soon lost confidence in Asquith's leadership because of his inefficiency. 16:43 27/04/07 Ruth Naughton-Doe 1 ...read more.