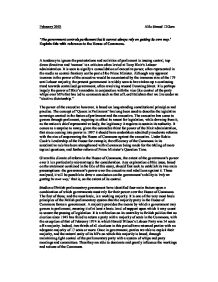 'The government controls parliament but it cannot always rely on getting its own way.' Explain this with reference to the House of Commons.

February 2003 Alfie Stroud 12Gore 'The government controls parliament but it cannot always rely on getting its own way.' Explain this with reference to the House of Commons. A tendency to ignore the protestations and activities of parliament in issuing central, top-down directives and 'memos' is a criticism often levied at Tony Blair's Labour administration. It is seen to signify a consolidation of executive power, often represented in the media as control-freakery on the part of the Prime Minister. Although any apparent increase in the power of the executive would be accentuated by the immense size of the 179 seat Labour majority, the present government is widely seen to have taken up a continuing trend towards centralised government, often revolving around Downing Street. It is perhaps largely the power of Blair's mandate in conjunction with the vice-like control of the party whips over MPs that has led to comments such as that of Lord Hailsham that we live under an "elective dictatorship." The power of the executive however, is based on long-standing constitutional principles and practise. The concept of 'Queen in Parliament' has long been used to describe the legislative sovereign created in the fusion of parliament and the executive. The executive has come to govern through parliament, requiring in effect its assent for legislation, while drawing from it, as the nation's chief representative body, the legitimacy it requires to sustain its authority. It comes as a surprise to many, given the ostensible thirst for power of the Blair administration, that since coming into power in 1997 it should have undertaken admittedly moderate reforms with the aim of empowering the House of Commons against the executive. ...read more.

The same complexity of issues has led to a doubling of the use of Statutory Instruments between 1989 and 1994 - regulations issued by the executive ignoring Commons opinion. Such powers give government the means to override those charged with holding it to account, securing it at least basic dominance of parliament. The executive's four key prerequisites of Commons control are essentially guaranteed for any British government by the comparative stability and continuity of the parliamentary system: a majority government is assured by the First Past the Post system, while an ability to restrict opposition is inherent in the basic instruments of government. Yet equally the British system shelters innate means by which opposition can be exercised. Perhaps the most rudimentary of these is the opportunity for disruption presented by the government's reliance on at least certain level of consensual cooperation from the opposition. For on matters of little controversy where there is scarce reason for division of parliamentary opinion, such as on matters of administration for example, governments have come to rely on the acquiescence of official opposition and the safe support of their MPs in order to secure the passing of bills. In general this assistance is given and the majority of government bills go unchallenged in the Commons, partly since oppositions are all too aware that if they were to undermine the government's programme similar tactics could be expected against them when in government. Nonetheless when there are political points to be scored, opposition parties have a number of means by which they may stall the government's proceedings. ...read more.

The executive has for centuries drawn its authority and its legitimacy from parliament - from the House of Commons from which it is primarily drawn. The executive comes from parliament, and the two bodies are inseparably fused. With the consolidation of government power however, this principle has given rise to somewhat of a paradox. The appointment of the first Prime Minister, Robert Walpole, arose from the need for some central focus in the workings of parliament, and yet over two centuries later the executive of which the Prime Minister is head has come to define and control those very workings of parliament that gave rise to his office. Such a situation would be tolerable if parliament were truly able to hold the government to account - if it were able to tie it down to its mandate - but the government's domination of parliament has led it to control parliament's means of scrutiny and opposition. Among them, select committee powers, the time allocated to government scrutiny and the success of Private Member's Bills are all subject to the government's patience with them. Indeed it is largely due to governments' compliance with 'the rules' of British parliamentary government - the uncodefied conventions of our constitution that demand the ability of parliament to hold government to account - that parliament retains any real powers of scrutiny at all. The government is bound to constitutional moderateness by its need to keep the electorate onside: only in this context can government ever expect not to get its own way. ...read more.