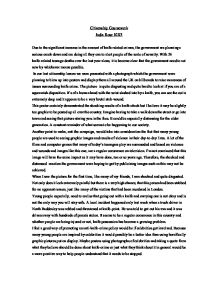 Citizenship Coursework India Rose 10X3 Due to the significant increase in the amount of knife related crimes, the government are planning a serious crack-down and are doing all they can to alert people of the scale of severity. With 26 knife-related teenage deaths over the last year alone, it is become clear that the government need to act now by whichever means possible. In our last citizenship lesson we were presented with a photograph which the government were planning to blow up into posters and display them all around the UK on billboards to raise awareness of issues surrounding knife crime. The picture is quite disgusting and quite hard to look at if you are of a squeamish disposition. It's of a human hand with the wrist slashed into by a knife, you can see the cut is extremely deep and it appears to be a very brutal stab-wound. This poster certainly demonstrated the shocking results of a knife attack but I believe it may be slightly too graphic to be posted up all over the country. Imagine having to take a walk down the street or go into town and seeing that picture staring you in the face. ...read more.

I'm not saying that this is a guaranteed way of helping to cease the number of knife-related incidents but it could help the project become more successful, in the sense that people will want to become more involved. If it assists in making even the slightest difference then it may just be worth it. We want knife-crime to stop because it is damaging people's lives, tearing families apart and taking away innocent people. We need to start taking action, now. London Knife Crime Protest As Another Victim Dies. Thousands of Londoners, alarmed by the rising toll of knife-crime in Britain over the past year, formed a protest march which took place only hours after a young man was stabbed to death in Brixton. The victim, Lucas Gordon was aged 23 when he was attacked outside Brixton Sports Club on Friday night and pronounced dead in hospital by 9pm. The march began this morning in Kensington park to the centre of London. Motorists beeped their horns in recognition and the march was accompanied by a gospel choir and chanting, "stop knives, save lives" It was made apparent that the friends and family of Mr Gordon planned to join the march even before he was killed. The victim, originally from Jamaica had celebrated his 23rd birthday, the day prior to his murder. ...read more.

I believe many mothers would want to read it, because they may be concerned as to why this protest is taking place and want to know whether to worry about the time or at which place the should not be allowing their children out at. To the everyday reader, the headline appears shocking and by saying that someone has been murdered, instantly provokes fear within a person and would make them want to find out more. This article includes a lot of points indicating that people of different ethnic groups are more often that not involved in the knife-related crimes. The places mentioned, as well as the names of the victim's given are all implicating black peop//.le. Brixton is well known for accommodating more black families than any other, and names such as, Damilola, Kingozila and Lucas are strong indications that this article is subtly trying to put a message across. Also, to make sure it's readers know the race of this particular victim, we have been told of his original race, not where he may have been living now, but of his ethnic background. The article does not stop by giving the names of places and people, but we are also told that a gospel choir was accompanying the march, gospel music is known for being influenced originally by black people and many of the gospel choirs of solo singers of today are of a black ethnicity. ...read more.