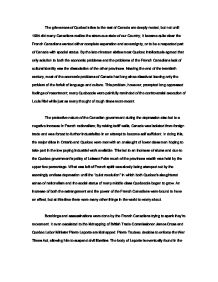 The grievances of Quebec's ties to the rest of Canada are deeply rooted, but not until 1995 did many Canadians realize the strenuous state of our Country;

The grievances of Quebec's ties to the rest of Canada are deeply rooted, but not until 1995 did many Canadians realize the strenuous state of our Country; It became quite clear the French Canadians wanted either complete separation and sovereignty, or to be a respected part of Canada with special status. By the late nineteen sixties most Quebec intellectuals agreed that only solution to both the economic problems and the problems of the French Canadians lack of cultural identity was the dissociation of the other provinces. Nearing the end of the twentieth century, most of the economic problems of Canada had long since dissolved leaving only the problem of the forfeit of language and culture. This problem, however, prompted long oppressed feelings of resentment; many Quebecois were painfully reminded of the controversial execution of Louis Riel while just as many thought of rough times more recent. ...read more.

An increase of both the estrangement and the power of the French Canadians were bound to have an effect, but at this time there were many other things in the world to worry about. Bombings and assassinations were done by the French Canadians trying to spark they're movement. It even escalated to the kidnapping of British Trade Commissioner James Cross and Quebec Labor Minister Pierre Laporte are kidnapped: Pierre Trudeau decides to enforce the War Times Act, allowing him to suspend civil liberties. The body of Laporte is eventually found in the trunk of a car and Cross is returned safely. But while Analyzing the past can show a lot of reason for a planted seed of hatred, what made it grow? Prime Minister Pierre repatriated the Canadian constitution from Britain without Quebec's assent in 1985: Other provinces signed it, and the Constitution included new Charter of Rights and Freedoms. ...read more.

Three years later the close loss of the referendum, Quebec was subjected to a sever five day ice storm, causing the deaths of two-dozen people, and more than 1.2 billion dollars damage. This act of nature required a country as a whole to help each other, not factions of undecided idealists, so in a sense, while it was a still a catastrophic event, it helped pull Canada together. So what was before a close 50.6% to 49.4% vote was now greatly in favor of staying a whole country. So has that ice storm saved our country? Far from it, The Quebecois still hope to hold a referendum in the future, and it is only a hope that they will someday find ties to our multicultural nation of Canada, and not that of what they see as the Anglo-oppressors that murdered their ancestry. ...read more.