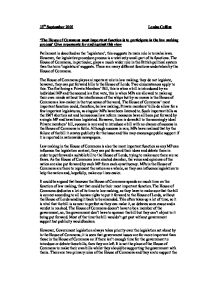 The House of Commons makes the government accountable, the government have to answer to them in order for new actions and policies to be justified or left open to debate, and this is a security blanket for the government. Representation; the House of Commons has to represent the nation, and, as such, when an issue is debated the nation are indirectly involved, they uphold the rights of the nation. Redress of grievances gives individuals the chance to air their dissatisfaction at certain governing bodies, therefore, being an outlet for complaints and people to air their opinions, so the same mistakes won't be made in the future. Also, the influence of the House of Commons can help minority groups to have a fair say in many debates, many MP s are sponsored by these minority groups. In conclusion, I think that a collaboration of all the functions is more important than having just one main role in the House of Commons, they all add to the way parliament is run and keep the machine running. Each function has a separate purpose that helps in its own way, if one was taken as a priority then other functions would begin to fail, which would, more often than not, be needed in the successful running of parliament. ...read more.