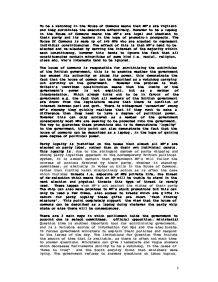 The House of Commons

To be a watchdog in the House of Commons means that MP's are vigilant and they scrutinise the executive effectively, However to be a lapdog in the House of Commons means the MP's are loyal and obedient to their party and its leaders in the hope of promotion prospects. The House Of Commons is made up of 646 MPs who are elected to represent individual constituencies. The effect of this is that MP's tend to be elected and re-elected by serving the interest of the majority within each constituency, however this tends to ignore the fact that all constituencies contain minorities of some kind i.e. racial, religion, class etc. who's interests tend to be ignored. The house of commons is responsible for scrutinising the activities of the British government, this is to examine weather the government has exceed its authority or abuse its power, this demonstrate the fact that the house of common can be described as a watchdog carrying out scrutiny on the government. However the problem is that Britain's unwritten constitution means that the limits of the government's power is not explicit, but as a matter of interpretation. Which always turns out to be in favour of the government e.g. the fact that all members of the British government are drawn from the legislature means that there is conflict of interest between parl and govt. ...read more.

Ministers can give inadequate and vague answers which decreases Parliaments ability to be a watchdog, in the cases of "Arms to Iraq" and the Scott enquiry found that ministers were lying. The government refuses to answers questions on taboo topics, such as security matters. As in the case with other debates, question time often develops into party political point scoring, and no effective use of the time available is made. There is also Prime Ministers Question time, and this is the main set piece of the parliamentary week. This supposedly gives MP's a chance to criticize and scrutinize the Prime Ministers policies. Tony Blair has revised the timetable for Prime ministers Question Time, and it is now held once a week. Limitations of Question Time are that there is planted or friendly questions are asked. This reduces parliamentary time yet further, and there are often endless debates on these issues. Other aspects, which do not have any effective use, are things such as disproportionate cost excuse, where ministers refuse to answer questions because the information is not readily at hand. Select committees Select committees are a small group of MP's who are supposed to be appointed by parliament, they enable parliament to scrutinise more effectively carrying out the watchdog role effectively. Select committees in the Houses of Commons monitor and scrutinize the executive functions of policy formulation and implementation by government rather than solely its legislative functions. ...read more.

was faced by a substantial minority of back bench mps within his own party over the issue if euro although this opposition only lead to a small number of defeats and did not have significant effect on the governments legislative programme it did create a public perception when the party was disunited to the point were they were defeated in the 1997 general election, currently the labour government has had a degree of opposition from some if its back bench mps over issues like tuition free, the introduction of the private sector in the public services e.g. water taxes and also the war in Iraq. However the house of commons can be describe as being a watchdog, due (PMB's) are introduced and promoted by backbench MP's. They take up approximately 10% of Parliamentary time, and are held on twelve Fridays in each session. The majority of PMB's fail, due to the lack of time available. In reality, the MP needs the government support to pass a Bill. PMS's are prone to filibustering, although there have examples of success in the 1960's reforms to law on abortion and homosexuality. In 1994, a PMB influenced the government to lower the age of consent for homosexuals to 18, this prove that not all the mp's can be described as being loyalty and obedient to some stand up for what they believe in and the house of common can then be called a watchdog. ?? ?? ?? ?? 1 1 ...read more.