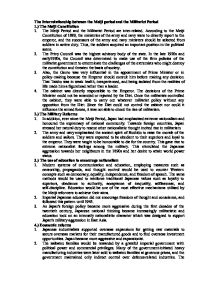 The Interrelationship between the Meiji period and the Militarist Period

The Interrelationship between the Meiji period and the Militarist Period 1.) The Meiji Constitution 1. The Meiji Period and the Militarist Period are inter-related. According to the Meiji Constitution of 1889, the ministries of the army and navy were to directly report to the emperor, and the successors of the army and navy ministers should be selected from soldiers in active duty. Thus, the soldiers acquired an important position in the political scene. 2. The Privy Council was the highest advisory body of the state. In the late 1920s and early1930s, the Council was determined to make use of the firm policies of the militarist government to exterminate the challenges of the extremists who might destroy the constitution and threaten the basis of society. ...read more.

2.) The Military Reforms 1. In addition, ever since the Meiji Period, Japan had emphasized extreme nationalism and honoured the supremacy of national community. Towards foreign countries, Japan stressed her natural duty to rescue other nationalistic thought incited rise in militarism. 2. The army and navy emphasized the ancient spirit of Bushido to raise the morale of the soldiers and sailors. They were expected to be obedient to their superiors and loyal to the emperor. They were taught to be honourable to die for the country. This gave rise to extreme nationalist feelings among the military. This stimulated the Japanese aggression towards her neighbours in the 1890s and her desire to attain world power status. ...read more.

4.) Economic reforms 1. Japanese industrialists supported overseas expansions for getting raw materials to secure overseas markets for their manufactured goods and to find overseas investment opportunities. Japan became more aggressive and expansionist. 2. The zaibatsu families would be rewarded by a grateful imperial government with political power and commercial privileges. Many of the government-initiated heavy manufacturing industries were later sold to zaibatsu families at generous prices, and the government maintained only indirect control over defence-related industries. The economic domination of the zaibatsu became more prominent. 3. Later, the zaibatsu colluded with the warlords to control the government. They advocated the removal of party politics, implemented hard-line diplomacy and actively engaged in foreign aggression. ...read more.