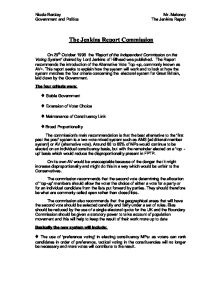 The Jenkins Report Commission On 29th October 1998 the 'Report of the Independent Commission on the Voting System' chaired by Lord Jenkins of Hillhead was published. The Report recommends the introduction of the Alternative Vote Top-up, commonly known as AV+. This report seeks to explain how the system will work and to look at how the system matches the four criteria concerning the electoral system for Great Britain, laid down by the Government. The four criteria were: ? Stable Government ? Extension of Voter Choice ? Maintenance of Constituency Link ? Broad Proportionality The commission's main recommendation is that the best alternative to the 'first past the post' system is a two-vote mixed system such as AMS [additional member system] or AV (alternative vote). Around 80 to 85% of MPs would continue to be elected on an individual constituency basis, but with the remainder elected on a 'top-up' basis which would reduce the disproportionality present in FPTP. ...read more.

The use of 'preference voting' in electing constituency MPs: as voters can rank candidates in order of preference, tactical voting in the constituencies will no longer be necessary and more votes will contribute to the result. ? The use of 'open lists' to elect MPs at county level: electors can choose between candidates on a party's list, rather than the choice being made for them by party committees ? Having 'top-up' lists for counties and cities, rather than for wider areas, ensures that MPs elected from lists will have more of a constituency link than might otherwise have been the case and partly meets the concern that the system creates two types of MP. ? The Society also welcomes the proposal that the voting system be evaluated after 10 years. The advantages and disadvantages of this new proposal: One issue which will be raised under this new proposal, is the existence of coalition governments. ...read more.

It will no longer be possible for political parties to use the line "They can't win here. If you vote for them, you will let X win". Also on the top-up lists, voters will be able to choose which candidate should represent the party of their choice. Given the size of the lists (they will be very small with no more than 3 names) parties will be able to adopt very similar selection procedures for the constituency seats and the top-up lists. Because top-up MPs are going to represent counties (or similar sized areas), it will be possible to make the County MPs accountable to their local parties in a similar way to the way MPs are accountable at present. The new system will still allow single party government where that is in tune with the mood of the country, but it will also encourage parties to work together. Parties will be able to tell their supporters to cast their second preferences for party X. ...read more.