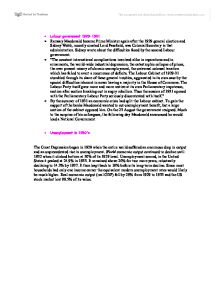 * Labour government 1929-1931 * Ramsay Macdonald became Prime Minister again after the 1929 general election and Sidney Webb, recently created Lord Passfield, was Colonial Secretary in that administration. Sidney wrote about the difficulties faced by the second Labour government: * "The constant international complications involved alike in reparations and in armaments, the world-wide industrial depression, the catastrophic collapse of prices, the ever present misery of chronic unemployment, the universal colossal taxation which has failed to avert a recurrence of deficits. The Labour Cabinet of 1929-31 stumbled through its share of these general troubles, aggravated in its own case by the special difficulties inherent in never having a majority in the House of Commons. The Labour Party itself grew more and more restive at its own Parliamentary impotence, section after section breaking out in angry rebellion. Thus the session of 1931 opened with the Parliamentary Labour Party seriously discontented with itself." * By the summer of 1931 an economic crisis had split the Labour cabinet. To gain the support of the banks Macdonald wanted to cut unemployment benefit, but a large section of the cabinet opposed him. On the 23 August the government resigned. Much to the surprise of his colleagues, the following day Macdonald announced he would lead a National Government * Unemployment in 1930's The Great Depression began in 1929 when the entire world suffered an enormous drop in output and an unprecedented rise in unemployment. ...read more.

People's resources were depleted by then and so were many of their friends'. So the human misery caused by the Depression really started in the mid-1930s. The political backlash to the miserable economic situation is often blamed for toppling democracies, bringing fascist governments to power in Germany, Italy, and Japan, and ultimately provoking the Second World War. "Hitler's rise to power can be directly linked to the profound economic crisis in Germany at that time". The German economic crisis was compounded by the huge war reparations imposed upon the Germans following World War I (an interesting comment on the efficacy of economic sanctions!). * Baldwin + abdication crisis * National Government, Abdication Crisis and Rearmament National Government - Baldwin (seated, second left) at MacDonald's right hand * Part of the National Government * By 1931, the Labour government was in a financial crisis and the party was split over benefit cuts. Prime Minister Ramsay MacDonald resigned and formed a National Government with Baldwin as Lord President of the Council. * This office suited him well apparently, as Baldwin was not a man for great detail. He was also happy with his secondary role. A friend, Thomas Jones, said at the time: "Being second and not first suits him perfectly and frees him from the final version and therefore the worry." ...read more.

* When Mussolini had invaded Abyssinia (Ethiopia) in 1935, the British Foreign Secretary Samuel Hoare and his French counterpart, Pierre Laval, negotiated a secret deal. * This involved allowing the Italian dictator to keep most of Abyssinia in return for peace. There was an outcry when this got out and Baldwin was forced to dump Hoare. * Baldwin's biggest failure * Baldwin's reputation also suffered over the question of rearmament in the face of Hitler's increasing aggression. * He was primarily interested in domestic politics in any case and was sensitive to the moods of the electorate. * In one famous speech in 1936 Baldwin said he had been worried about events in Europe in 1933 but that the mood of the nation had been overwhelmingly pacifist. He recalled a by-election in autumn 1933 which had been won by a candidate on that single issue. * Baldwin remarked that fighting a general election on that issue would have been disaster for the Conservatives. Churchill later interpreted that comment scathingly as a confession that Baldwin had "put party before country". * That charge is unfair as Baldwin was speaking theoretically and the international situation was not as clear-cut as it appeared with hindsight, but the general point that he - and others such as Chamberlain - failed to do enough to confront the dictators will always tarnish his reputation. ...read more.