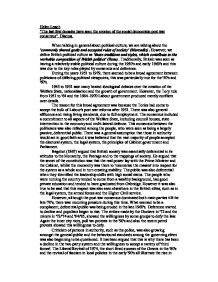 Helen Leach "The last few decades have seen the erosion of the social democratic post war consensus". Discuss. When talking in general about political culture, we are talking about the 'commonly shared goals and accepted rules of society' (Marcadis). However, we define British political culture as 'those traditions and styles, which contribute to the workable composition of British politics' (Rose). Traditionally, Britain was seen as having a relatively stable political culture during the 1950's and early 1960's and this was due to the key roles played by consensus and deference. During the years 1951 to 1979, there seemed to be a broad agreement between politicians of differing political viewpoints, this was particularly true for the '50's and '60's. 1945 to 1951 saw many heated ideological debates over the creation of the Welfare State, nationalisation and the growth of government. However, the Tory rule from 1951 to '64 and the 1964-1970 Labour government produced merely conflicts over details. The reason for this broad agreement was because the Tories had come to accept the bulk of Labour's post war reforms after 1951. There was also general affluence and rising living standards, due to full employment. The consensus included a commitment to all aspects of the Welfare State, including council houses, state intervention in the economy and multi-lateral defence. ...read more.

The Liberal Revival of 1974, the short lived success of the Greens in the '80's and the revival of fascism in local policies in the early '90's all illustrate the rise in anti-partyism. The failure in restoring economic stability in Britain has caused the public to loose confidence within the two main parties. Loss of pride within our institutions is claimed to also be increasing in society. The 'mishandling' of Princess Diana's death and the constant media coverage of Prince Charles' private life places the Monarchy under constant scrutiny. Also since the late '60's aspects of British life have been increasingly scrutinised, perhaps because of the economic decline. There are also strong criticisms about the judiciary and the police, after the MacPherson report highlighted the inadequacies of the police during the Stephen Lawrence tragedy. However, although deference was in decline, the old post war consensus was strong till the late 70's. Although it's arguable that from 70-72 this was not the case. Heath tried and failed to tinker with the government's commitment to economic planning and a comprehensive Welfare State in the early '70s and was forced to do a 'U' turn on such policies in '72. It was the 'Winter of Discontent' which developed some support for the more right wing conviction politics of the Conservatives' new leader, Margaret Thatcher. ...read more.

Major was seen as more conciliatory, more caring and a greater readiness to listen. There also was a seemingly more collectivist style of Cabinet government and Major was interpreted as being more consensual. For example the abolition of the poll tax. Some policy proposals even seemed to be borrowed from Labour, e.g. transport, and citizens' charters aimed at improving public services. However many Thatcherite policies were still pursued. Some even argue that the Major government was a government of hesitancy, obsessed with PR and media images in an electorally unpopular time warp. It is now argued that in its desire to look prudent, Labour has accepted a great deal of 'Thatcherist' policies. Labour is more committed to the NHS, constitutional reform and Europe has modified some Tory education policies, but some supporters remain disappointed. Labour may be interpreted as a modernised Butskellism, hence Hague's problems in choosing topics where the Tories appeared different, like Ian Duncan Smith is currently struggling to do. Post war Britain has experienced a sharp decline in international status and relative economic prosperity. It is arguable that this has led to more criticism of the governing elites and may have sapped their confidence. The public also being more critical of procedures and institutions has resulted in less faith in British politicians. The decline in deference has also made the public more demanding of government and less tolerable of failure. M. Moran suggests that Britain's previous stability during the 1950's was an aberration rather than the norm. ...read more.