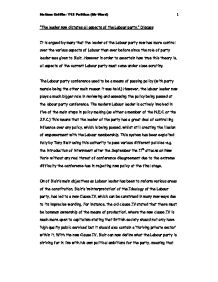 "The leader now dictates all aspects of the Labour party." Discuss It is argued by many that the leader of the Labour party now has more control over the various aspects of Labour than ever before since the role of party leader was given to Blair. However in order to ascertain how true this theory is, all aspects of the current Labour party must come under close scrutiny. The Labour party conference used to be a means of passing policy (with party morale being the other main reason it was held.) However, the labour leader now plays a much bigger role in reviewing and assessing the policy being passed at the labour party conference. The modern Labour leader is actively involved in five of the main steps in policy making (as either a member of the N.E.C. or the J.P.C.) This means that the leader of the party has a great deal of controlling influence over any policy, which is being passed, whilst still creating the illusion of empowerment with the Labour membership. ...read more.

Bernie Eccleston.) However, The Unions do still control half of the total vote at conferences and sponsor some Labour MPs. They are a representation of Labours traditional voters and so the party must now disregard them. This may be why the labour party has recently used the Trade Unions in consultation matters, such as the FBU pay dispute and the new minimum wage. Although Blair does control some power over the Union aspect of the party, the Unions themselves do still have some individual influence and control. The membership aspect of the Labour party is an area where it is much harder to decide who has actually has control. Blair loses out to the party membership in one sense, as they are actively involved in policy making within the N.P.F. meaning that the leader cannot totally dominate that aspect of policy. However, the membership is uninformed and so can be (and are) completely exploited by Blair who used his wealth of Advisors, Informers and other specialists to gain the upper hand on the members. ...read more.

However, this does not mean that Blair is not accountable to the press, which is why he must control, the party so precisely at conference so as not to embarrass himself. In conclusion, 'Blairism' has led to a much stricter control over the varying aspects of the party by the Labour leader, which has, if election results are to be taken into account, been very successful for the party on a whole. However, this may have been at the expense of socialism in the UK. Blair's almost dictator like control over every aspect of the party is only counteracted by his more limited influence over the party membership, who he may be willing to follow. Blair currently sits with the biggest Labour rebellion in the history of his term in power hanging over his head, and Blair's decision on a war with Iraq may well make it clear to what extent Blair feels obliged to listen to his party members and to what extent Blair just does what he likes. 1 Nathan Griffin- Y12 Politics (Mr Ward) ...read more.