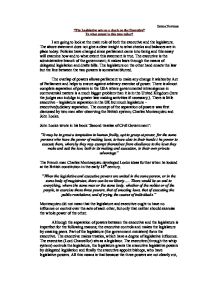 The Legislative acts as a check on the Executive - To what extent is this true today?

Emma Newman "The Legislative acts as a check on the Executive" To what extent is this true today? I am going to look at the main role of both the executive and the legislature. The above statement does not give a clear insight to what checks and balances are in place today. Policies have changed since parliament came into being and this essay will examine how and to what extent this statement is true. The executive is the administrative branch of the government; it makes laws through the means of delegated legislation and drafts bills. The legislature on the other hand enacts the law but the line between the two powers is somewhat blurred. The overlap of powers allows parliament to make any change it wishes by Act of Parliament and helps to ensure against arbitrary exercise of power. There is almost complete separation of powers in the USA where governmental intransigence in controversial matters is a much bigger problem than it is in the United Kingdom (here the judges can indulge in greater law making activities if necessary.). There is little executive - legislature separation in the UK but much legislature - executive/judiciary separation. The concept of the separation of powers was first discussed by two men after observing the British system; Charles Montesquieu and John Locke. John Locke wrote in his book 'Second treatise of Civil Government': "It may be to great a temptation to human frailty, apt to grasp at power, ...read more.

Select committees further scrutinize the work of the executives main departments e.g. transport, education, agriculture etc. Fourteen committees are appointed for the life of a parliament and each committee has either nine or eleven members made up from back bench MP's. Each committee has a majority of members from the government side of the house. Select committees are free to investigate any part of the government's activities they wish as no governmental approval is needed. But for criticisms of the government to be made, it must be supported by on or more MP's from the government side of the house. Because legislative and executive powers are closely inter twined, and ministers are members of both powers, the two institutions are distinct from each other. The process of legislation is different from the day to day running that the executive carries out. The power of the executive has grown and checks are in place to prevent abuse of this power. The question is: are they strong enough? I believe and the evidence above backs me up that there are a wide extent of checks and balances but the executive still has an awful lot of power but the legislature has got its priorities right with starting to check on it. It is important for the legislature to keep checking on the executive so that control is maintained and it does not slip in to more of a dictatorship role. In conclusion therefore the legislature does act as a check on the executive but it also has other functions to carryout. ...read more.