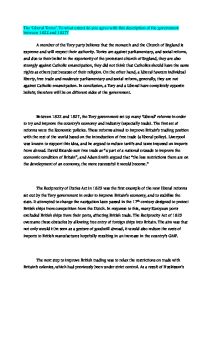 The 'Liberal Tories'. To what extent do you agree with this description of the government between 1822 and 1827?

The `Liberal Tories'. To what extent do you agree with this description of the government between 1822 and 1827? A member of the Tory party believes that the monarch and the Church of England is supreme and will respect their authority. Tories are against parliamentary, and social reform, and due to their belief in the superiority of the protestant church of England, they are also strongly against Catholic emancipation, they did not think that Catholics should have the same rights as others just because of their religion. On the other hand, a Liberal favours individual liberty, free trade and moderate parliamentary and social reform, generally, they are not against Catholic emancipation. In conclusion, a Tory and a Liberal have completely opposite beliefs; therefore will be on different sides of the government. Between 1822 and 1827, the Tory government set up many `Liberal' reforms in order to try and improve the country's economy and industry (especially trade). The first set of reforms were the Economic policies. These reforms aimed to improve Britain's trading position with the rest of the world based on the introduction of free trade (a liberal policy). Liverpool was known to support this idea, and he argued to reduce tariffs and taxes imposed on imports from abroad. ...read more.

The prisons were filthy and unkempt and in urgent need of improvement. Between 1823 and 1830, Peel as home security passed a whole series of reforms that transformed the rather outdated system he inherited. The penal code was modernised, and the death sentence was abolished for over 180 offences. In 1823, the Gaols (Jails) Act was passed, this improved conditions in the prisons. Finally, Peel established the Metropolitan police in 1829; this attempted to stem the alarming rise in crime in Britain. Overall, the social and economic reforms set up between 1822 and 1827, do support the title `Liberal Tory'. But there were still many areas that needed reform that the government did not address, for example the lack of parliamentary reforms and catholic emancipation; making the improvements carried out seem less effective in improving the British economy and the people's discontent. The title `Liberal Tory' contradicts itself, making it seem almost impossible because Liberals and Tories are completely different parties with opposite beliefs and priorities. Liberals favour individual liberty, free trade, and parliamentary and social reforms; as well as catholic emancipation. Tories, however support the monarchy and the Church of England, and are against parliamentary and social reform, and catholic emancipation. ...read more.

The six acts in December 1819 were seen as one of the repressive acts between 1815-22, but the measures introduced were a "commonsense reaction to a dangerous situation and deserve to be looked at in a more positive light in terms of their supposed severity on the radical threat to the regime". This quote supports the argument that the period 1815-22 was not as repressive as once thought. Also, although there were many reforms set up between 1822-27, parliamentary reforms and catholic emancipation were not addressed with any seriousness. This evidence suggests that there was more consistency between 1815 and 1827 because it appears that the first half of this time was not as repressive as once thought and the second half of this period was not as liberal as once thought. In conclusion, compared to the previous actions of the Tory government, the reforms set up between 1822 and 1827 were more liberal then they had been previously. However, the years 1815-1822 were less repressive then had previously thought, and although there had been many reforms in the later section that had helped to stabilise the state, there was no commitment to parliamentary reforms and catholic emancipation making the period 1822-1827 less liberal. This meant that overall there was more continuity in the years 1815-1827 and the policies and personalities of the members of the Tory cabinet had remained constant making the title `Liberal Tory' less reliable. ...read more.