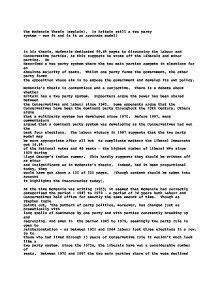 The McKenzie Thesis (explain). Is Britain still a two party system &amp;#150; was it and is it an accurate model?

The McKenzie Thesis (explain). Is Britain still a two party system - was it and is it an accurate model? In his thesis, McKenzie dedicated 99.6% pages to discussing the Labour and Conservative parties. As this suggests he wrote off the Liberals and minor parties. He described a two party system where the two main parties compete in elections for an absolute majority of seats. Whilst one party forms the government, the other party forms the opposition whose aim is to expose the government and develop its own policy. McKenzie's thesis is contentious and a conjective. There is a debate about whether Britain has a two party system. Supporters argue the power has been shared between the Conservatives and Labour since 1945. Some opponents argue that the Conservatives have been the dominant party throughout the 20th Century. Others argue that a multiparty system has developed since 1970. ...read more.

And even in the period 1945 to 1979, seemingly two party rule is open to reinterpretation - as between 1951 and 1964 Labour lost three elections in a row. So to those who had lived through 13 years of Conservative rule it wouldn't much look like a two party system. Since the 1970s, the Liberals have won a considerable number of seats. Between 1970 and 1997 the two main parties share of the vote declined markedly. The Alliance won almost a quarter of the National vote - 25.4% in 1983. Since 1974 the plurality-rule voting system has always given around one fifth of the seats to parties not justified to hold them in terms of their share of the National vote. Labour and the Conservative can still jointly run an unreformed House of Commons as a kind of two-party majority government on their own. For example, in the 1997 General Election, Labour won about 60% of the seats on about 40% of the National vote - clearly the present system, isn't representative as it leads to these 'elected dictatorships' (Lord Hoarsham). ...read more.

Even in London, the heart of England, the weakening grip of two party conflicts was evident at an institutional level in the run-up to the GLA elections 2000, when the prospect of Livingstone running as an independent candidate for mayor, influenced the Labour nomination process. And in the 1999 elections for the European parliament, the success of fourth and fifth parties i.e. the Greens and British Independent Party in winning multiple seats in English regions notched up another small milestone in the arrival of multiparty politics. It is too hard to describe Britain as a whole - Dearlove & Saunders - Britain can be characterised as a two party system in the commons. As a multiparty system in the country and as a dominant party system in the corridors of power. Because the electoral system and the multiparty politics have together enabled the Conservatives to monopolise the control of the state for more than a decade in a way that has mocked the close competition of the country at large. 2 ...read more.