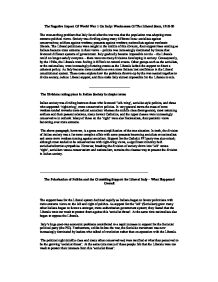 The Negative Impact Of World War 1 On Italy: Weaknesses Of The Liberal State, 1918-20.

The Negative Impact Of World War 1 On Italy: Weaknesses Of The Liberal State, 1918-20 The over-arching problem that Italy faced after the war was that the population was adopting more extreme political views. Society was dividing along many different lines: socialists against conservatives; soldiers against workers; peasants against workers; nationalists against moderate liberals. The Liberal politicians were caught in the middle of this division, their support base eroding as Italians became more extreme in their views - politics was increasingly dominated by forces that favoured different systems of government. Italy gradually became impossible to rule - the Liberals could no longer satisfy everyone - there were too many divisions developing in society. Consequently, by the 1920s, the Liberals were finding it difficult to control events. Other groups such as the socialists, or the nationalists, were increasingly dictating events as the Liberals lacked the support to direct a coherent policy. As Italy became more unstable so even more Italians lost confidence in the Liberal constitutional system. These notes explore how the problems thrown-up by the war reacted together to divide society, reduce Liberal support, and thus make Italy almost impossible for the Liberals to rule. ________________________ The Divisions taking place in Italian Society in simple terms Italian society was dividing between those who favoured 'left-wing', socialist style politics, and those who supported 'right-wing', more conservative policies. In very general terms the mass of town workers tended towards more radical socialism whereas the middle class (bourgeoisie), most returning soldiers and their peasant relations, many devout Catholics, and the upper classes were increasingly conservative in outlook. Many of those on the 'right' were also Nationalists, their patriotic views becoming ever more extreme. The above paragraph, however, is a gross over-simplification of the true situation. In truth, the division of Italian society was a far more complex affair with some peasants becoming socialists or nationalists and some town workers turning against socialism. ...read more.

Decisive action rather than weak talking, to many Italians, appeared to be much the most successful policy. Consequently, many more Italians began to doubt the Liberal system. D'Annunzio became a national hero and, in contrast, the Liberal government looked even weaker as it failed to act for over a year. This incident also shows the destabilising influence of the armed squads. In short, the growing nationalism, brought about by the belief in a 'mutilated victory', was also undermining the Liberal system. ___________________ Overall, society and politics had polarised so eroding the Liberal support base in the middle. This was Italy's main problem before the war - it had become near impossible to govern. Weaknesses in the Electoral System The electoral system created even more instability (between June 1919 and October 1922 there were 4 different Prime ministers: Nitti, Giolitti, Bonomi and Facta). As it was a proportional representation system it became very difficult to form coalitions as no single party would come even close to getting a majority. This left competing party blocks in parliament. These blocks found it difficult to work with each other due to the divisions in society (e.g. the socialist PSI party would not work with the Catholic PPI party). As a consequence the country was not run effectively, the governments/prime ministers changing, and all the time the social/economic problems continuing. Proportional representation can also be a weak election system as it can let small, extremist political parties gain a disproportional amount of power. This would soon become a problem. Italy7 The Weaknesses Of The Liberal State Continued: 1919-1922 The post-war problems outlined in 'Italy6' simply got worse after 1919. It became impossible for the Liberals to rule as other groups increasingly dictated events. The Liberals were fast becoming an irrelevant force as they increasingly relied on the Fascists for support - not directly, but by tacitly approving the fascist action. ...read more.

and former socialists like Mussolini himself. They had little in common except a hatred of both the Liberal State and the class struggle aspect of socialism (they burnt the offices of the socialist newspaper Avanti in April!). These people believed that only through unity (and not the class struggle of socialism) could the Italian nation achieve greatness. The term Fascio was used as a reference to the bound rods of the Roman Republic and the idea of 'national strength through unity'. The Fascio di Combattimento drew up a flexible programme that contained: Nationalistic demands for an expanded Italy (e.g. the right to control Fiume and Dalmatia) Demands for a Republic and true democracy (e.g. an Italian Republic [i.e. no king], titles of nobility to be abolished, female voting and proportional representation) Left-wing policies designed to provide an alternative to socialism (e.g. an 8 hour day, a minimum wage, confiscation of war profits and unproductive income, government to control the arms industry, workers to have a share in managing businesses and their profits) However, the Fascio di Combattimento lacked the cohesion to form a disciplined and effective political party. It was just one of a number of radical groups with slightly differing beliefs, D'Annunzio's occupation of Fiume seen as the main challenge to the Liberal system. Mussolini was not a major political figure, he was just a leader of one fascist style group - the Fascio di Combattimento. What prominence Mussolini did have was due to his editorship of the Popolo newspaper. Consequently, the Fascists performed badly everywhere in the elections of November 1919. They had failed to win a single seat in the new parliament. Mussolini only gained 5,000 votes out of 270,000 in Milan, the area of greatest Fascist support. By the end of the year there were perhaps only 4000 Fascist supporters left in the whole of Italy as radical 'leftists' returned to socialism! Overall, it appeared that the fascist movement was doomed due to lack of support. ...read more.