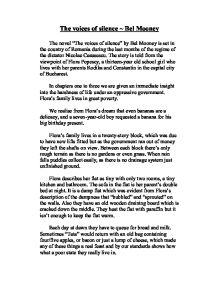 The novel &quot;The voices of silence&quot; by Bel Mooney is set in the country of Romania during the last months of the regime of the dictator Nicolae Ceausescu.

The voices of silence ~ Bel Mooney The novel "The voices of silence" by Bel Mooney is set in the country of Romania during the last months of the regime of the dictator Nicolae Ceausescu. The story is told from the viewpoint of Flora Popescy, a thirteen-year old school girl who lives with her parents Rodika and Constantin in the capital city of Bucharest. In chapters one to three we are given an immediate insight into the harshness of life under an oppressive government. Flora's family lives in great poverty. We realise from Flora's dream that even bananas are a delicacy, and a seven-year-old boy requested a banana for his big birthday present. Flora's family lives in a twenty-story block, which was due to have new lifts fitted but as the government ran out of money they left the shafts on view. Between each block there's only rough terrain as there is no gardens or even grass. When rain falls puddles collect easily, as there is no drainage system just unfinished ground. ...read more.

Also Flora had one present rapped in the same paper their food was wrapped in, yet her mum had drawn and painted moons and stars on it. Flora had a scarf as her only present, she really appreciated it because it was an extravagance not a necessity. Daniel Ghiban had joined the school on the first day back. At lunchtime everyone crowded round him because of what he had on his sandwiches which was proper meat on soft bread and cake. On that day Flora's school bag had broken again, she mentioned her mum had already mended it five times before, another example that they can't afford new possessions. Daniel Ghiban stopped to help her pick her stuff and sharpened her pencil with a real sharpener. Flora told Daniel that usually she sharpens with a knife. Daniel wore real jeans, a blue jumper with the schools badge on and trainers, he really stood out from the others because Flora described everyone in school looked the same "Drab dark clothes" From the opening chapters of the book we also learn a great deal about the political regime. ...read more.

Also Flora was worried when Aly's called "Old Ceausecu" an old monster. This was evident because Flora tried shushing Aly's and looking over her soldier to see if anybody had heard. Another point about this is the fact that Daniel was not supposed to tell his friends how he had managed to have decent food, he told his friends in a whisper, which later made Flora nervous of running footsteps behind her. Constantin was suspicious that Daniel had arrived unexpectedly at their flat bringing M&M's for Flora's birthday. Father said "It was not Right" because even though he was a school friend he was a stranger, adding people in Romania have to look after themselves and it wasn't normal to send presents to others unless they wanted something in return. From my reading of the novel so far, I understand life in a country like Romania must be very miserable. I think that the thing I would hate most of all would be the fact that you couldn't have any real friend or someone to trust as you have to live a life of secrecy and whispers because you never know who might be listening in on you. ...read more.