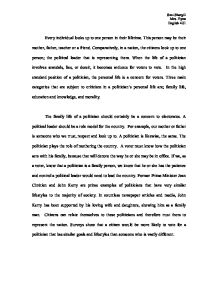 Every individual looks up to one person in their lifetime. This person may be their mother, father, teacher or a friend. Comparatively, in a nation, the citizens look up to one person; the political leader that is representing them. When the life of a politician involves scandals, lies, or deceit, it becomes arduous for voters to vote. In the high standard position of a politician, the personal life is a concern for voters. Three main categories that are subject to criticism in a politician's personal life are; family life, education and knowledge, and morality. The family life of a politician should certainly be a concern to electorates. A political leader should be a role model for the country. For example, our mother or father is someone who we trust, respect and look up to. A politician is likewise, the same. The politician plays the role of mothering the country. A voter must know how the politician acts with his family, because that will denote the way he or she may be in office. ...read more.

It is like, an employer hiring for a job. Without the resume of the applicant, how does the employer know what experience or skills they have? If our president has the education of someone who has only obtained their high school diploma or a college drop out, do we really know, that they would be able to withstand the pressures of a political leader's job? Having an ample amount of information, based on the political leader's education and experience, allows a citizen to make a choice where they having full knowledge about who they are voting for. For example, David Peterson's quote, "Your job is to work as hard as you can in government, and to work as hard as you can in your ridings for the people you represent, because the time will come when you will not want me to come into your ridings. The time will come when I am so personally unpopular that you won't want help from me....and then at that moment, when I am not able to help, your chances of being re-elected are going to depend entirely on your own efforts," displays his knowledge in government. ...read more.

Therefore being aware of the morality our political leader, allows us to make a judgement for who we should vote. The personal life of a political leader should be a concern for voters, because they are entitled to know about an individual who they are entrusting their nation with. The three principles; family, education and knowledge, and morality play a great role in the life of a politician which the society should know of. A leader, who is a family man, influences the votes infinitely, because it is evident, that he or she is someone who is respectable and honourable. A leader with morals is a concern for voters because they want a leader who has the ability to lead his nation into bettering themselves individually and mutually. A leader with the knowledge and aptitude to lead and govern his country as exemplary, states that there would be no question about his or her capabilities of leading a nation. A leader's life will always be a concern to the citizens because without the knowledge of our fellow political leaders, we can not put forth a vote, to a complete stranger. ...read more.