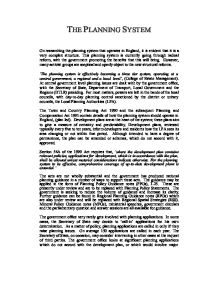 The planning system that operates in England

THE PLANNING SYSTEM On researching the planning system that operates in England, it is evident that it is a very complex structure. This planning system is currently going through radical reform, with the government promoting the benefits that this will bring. However, many activist groups are sceptical and openly object to the new structural reforms. 'The planning system is effectively becoming a three tier system, operating at a central government, a regional and a local level', (College of Estate Management). At central government level planning issues are dealt with by the government office, with the Secretary of State, Department of Transport, Local Government and the Regions (DTLR) presiding. For most matters, powers are left in the hands of the local councils, with day-to-day planning control sanctioned by the district or unitary councils, the Local Planning Authorities (LPA). The Town and Country Planning Act 1990 and the subsequent Planning and Compensation Act 1991 contain details of how the planning system should operate in England, (plan led). Development plans are at the heart of the system; these plans aim to give a measure of certainty and predictability. Development plans, reviewed typically every five to ten years, inform developers and residents how the LPA sees its area changing or not within that period. ...read more.

Rules on development are often unclear; some development plans need planning consent, others do not. Speed and predictability - over 90% of councils do not meet their target, 80% of planning applications should be decided within 8 weeks. Applications lack predictability because the criteria, on which they are judged, are not transparent. The current plan led system was introduced in 1991, although some authorities have yet to put their plan in place, mainly due to plans being time consuming and costly to produce and the appeals system being slow, taking from 17 - 31 weeks to resolve an appeal. Customer focus and standards - user-friendly, straightforward advice is hard to find when submitting plans. Once these plans have been submitted, keeping track of their progress is extremely difficult. Many local planning departments are inundated with housing applicants, thus leaving less time to spend on complex industrial/commercial plans. It is evident that there is a skill and resource shortage; many elected councillors do not have the relevant training. Enforcement - People avoiding planning controls undermine confidence in the system; effective action needs to be taken to restore confidence. The recommendations in these consultation papers have led to the publication of 'The Planning and Compulsory Purchase Bill', which will take these proposals forward, and is expected to come into force by April 2004. ...read more.

So planning powers will be transferred from elected local authorities to unelected regional bodies. These powers will stay with these quangos unless regions opt for an elected regional assembly.'(3) www.lga.gov.uk. New localism or new centralism? planning and the regions The present system arguably comprises a needlessly complex system of overlapping controls, serving us well for over 50 years. With sustainable development at its core, it has and will protect our future generations' needs. It is my opinion that the proposed new system will not fair so well in the future. The government intends to implement business zones, seemingly a glorified version of the 1980s Enterprise Zones, which have not been a long-term nationwide success. The acceleration of development must have an impact on stability! The current system is far from perfect and there are suggestions that it can be improved without the need for radical reform, for instance, increasing the cost of planning applications, putting an end to twin tracking, increased and more effective enforcement procedures, to name but a few. It is essential that the promotion of sustainable development is central to the planning system. The reforms as they stand are preoccupied with regional and local guidance. ...read more.