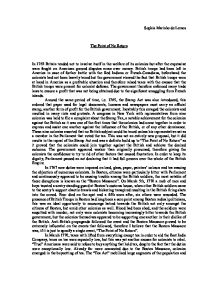 The Point of No Return - In 1763 Britain tended not to involve itself in the welfare of its colonies but after the expensive wars fought on American ground disputes arose over money.

Sophia Marinho de Lemos The Point of No Return In 1763 Britain tended not to involve itself in the welfare of its colonies but after the expensive wars fought on American ground disputes arose over money. British troops had been left in America in case of further battle with the Red Indians or French-Canadians, beforehand the colonists had not been heavily taxed but the government viewed the fact that British troops were at hand in America as a profitable situation and therefore raised taxes with the excuse that the British troops were present for colonist defense. The government therefore enforced many trade laws to ensure a profit that was not being obtained due to the significant smuggling from French islands. Around the same period of time, i.e. 1765, the Stamp Act was also introduced, this ordered that paper used for legal documents, licenses and newspapers must carry an official stamp, another form of profit for the British government. Inevitably this enraged the colonists and resulted in many riots and protests. ...read more.

The presence of British Troops in Boston had long been a sore point among Boston radical politicians, this was an ideal opportunity to encourage hatred towards the British not only amongst the citizens of Boston, but amid other colonies as well. Blood had been shed, and the soldiers were acquitted with murder, not only were colonists becoming increasingly bitter towards the British government, but the colonies themselves appeared to be supporting one another in their dislike of the British. Anti-British propaganda followed the event and the Boston Massacre proved to be extremely influential on the events that followed, therefore I believe that the Boston Massacre was, if it is just to specify a single event, "The Point of No Return". In March 1770, taxes with lifted from everything except tea in order to aid the East India Company, taxes on tea were especially low, but this was yet another excuse for colonists to rebel. "True" Americans were said to refuse to buy anything that held tax, despite the fact that the duties were exceptionally low. ...read more.

A sense of patriotism continued to rise and colonists grew increasingly determined to rid of British authority. All thirteen colonies hence met in Philadelphia yet again to create an army and navy that would fight and eventually win the War of American Independence, 1775-83. By this time America was in quite a chaotic state, and relations with Britain were frail, "The Point of No Return" had long since been passed, though it is hard to specify exactly what this occasion was, the "Boston Massacre" seems the most plausible. It must be noted that it is not a single event that resulted in the fact that colonies could not turn back and return to the previous way of life, not that they necessarily desired this, but all of the events that took place under British government control. The prospect of wealth and liberty had originally attracted the colonists to America, and the concept of this being threatened by the British caused much resentment. This tension was rapidly built up over the events that took place in the mid 18th century, eventually resulting in American independence from Britain. ...read more.