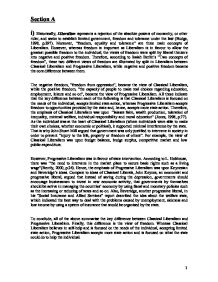 The position of the New Labour government with Tony Blair ahead of that government.

Section A i) Historically, Liberalism represents a rejection of the absolute powers of monarchy, or other ruler, and seeks to establish limited government, freedom and tolerance under the law (Budge, 1998, p.397). Moreover, "freedom, equality and tolerance" are three main concepts of Liberalism. However, whereas freedom is important as Liberalism is in favour to allow the greatest possible freedom to the individual, the views of freedom were split by liberal thinkers into negative and positive freedom. Therefore, according to Isaiah Berlin's "Two concepts of freedom", these two different views of freedom are illustrated by split in Liberalism between Classical Liberalism and Progressive Liberalism, while negative and positive freedom became the core difference between them. The negative freedom, "freedom from oppression", became the view of Classical Liberalism, while the positive freedom, "the capacity of people to make real choices regarding education, employment, leisure and so on", became the view of Progressive Liberalism. All these indicate that the key difference between each of the following is that Classical Liberalism is focused on the needs of the individual, accepts limited state action, whereas Progressive Liberalism accepts freedom to opportunities provided by the state and, hence, accepts more state action. Therefore, the emphasis of Classical Liberalism was upon "laissez faire, wealth production, toleration of inequality, minimal welfare, individual responsibility and moral education" (Jones, 1998, p.77). As the individual was at the heart of Classical Liberalism (where individuals were able to make their own choices, whether economic or political), it supported minimal interference by the state. That is why John Stuart Mill argued that government was only justified to intervene in society in order to prevent "injury to the life, property or freedom of others". For example, the view of Classical Liberalism was upon budget balance, budge surplus, competitive market and low public expenditure. However, Progressive Liberalism was in favour of state intervention. According to L. Hobhouse, there was "the need to intervene in the market place to secure basic rights such as a living wage"(Bently, 2000, p.24). ...read more.

To conclude, all of the above demonstrates the key differences between Marxism and Democratic Socialism. Also, even if both of them do not differ in terms of aims, as both ideologies are anti-capitalists, they differ in terms of tactics. That is why Marxism is regarded as revolutionary socialism and as an ideology on the extreme of the political spectrum. Section B It is known that after the general election defeat of the Labour Party in 1983, the social democrats used that defeat to justify a change in direction and adoption of social democratic values. However, after Tony Blair's successful leadership election campaign it became clear that he supported neither the social democratic or democratic socialist traditions. To show that ideological shift, Tony Blair and his supporters put the accent on the term "New Labour" and the very first thing they did, which confirms this shift, was the replacement of the old Clause IV of the Labour Party constitution. Looking at the new Clause IV main ideas, it becomes clear that Blair modernised the party and moved it from the previous ideologies. This can be proved by quotation from the new Clause IV, "...power, wealth and opportunity are in the hands of the many not the few, where the rights we enjoy reflect the duties we owe, and where we live together, freely, in a spirit of solidarity, tolerance and respect", while these ideas are rather different from the old Labour one (Bentley, 2000, p.35). So, as it is also known, for many political commentators it became difficult to determine the precise position of the New Labour government on the ideological spectrum. Nonetheless, all the ideas of the New Labour led to talk of a new approach to politics or, in other words, a Third Way (not left or right, but above), which believes in four main elements-"community, accountability, responsibility and opportunity". However, while some people (and Blair himself) ...read more.

To conclude, all of the above information shows that it is rather uneasy to say what exactly is the position of the New Labour government with Tony Blair ahead of that government, because, according to some political commentators' opinion, it is a mixture of ideologies as it accepted something from Conservatives, something from Socialists and something from Liberals, especially from Progressive Liberals. According to BBC, "The strategy of Tony Blair has been to move away from any fixed ideology and adopt a moral and pragmatic framework in which to create policies. However, Blair's vision is still developing and is in its present form open to interpretation by the new Labour Government" (www.bbc.co.uk, May 4, 2004). However, in my opinion, Tony Blair shifted the position of the New Labour government towards a Third Way that is called a new approach to politics. This opinion takes place as the central belief of the Third Way is cooperative self-help. Moreover, according to all of the above information, there can be found just some similarities between the New Labour government and each of other ideologies. Finally, as Bently states, the Third Way implies that the government's job is to help people to get together to help themselves and this requires a belief n self-help, self-reliance and self-improvement (Bentley, 2000, p.37). However, this quotation precisely reflects Blair's opinion about the role of government and society, as he says that "The primary role of government is not industrial ownership or intervention but investment in education and infrastructure... With stability, over time, has to come real improvements in productivity and investment from business itself" (www.pmo.gov.uk, May 4, 2004). To finish with, this belief of the leader of the New Labour government can be proved by government action and its policies. For example, it created a good climate for business by improving tax system, by leaving privatisation and by not increasing the Trade Unions power. Also, the New Labour government created the New Deal and improved the welfare state, while all these together, in its turn, help people to believe in themselves and then to get together to help themselves. 1 ...read more.