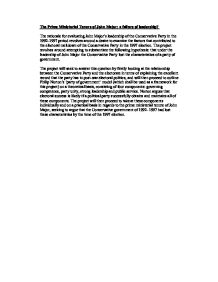 The Prime Ministerial Tenure of John Major: a failure of leadership?

The Prime Ministerial Tenure of John Major: a failure of leadership? The rationale for evaluating John Major's leadership of the Conservative Party in the 1992-1997 period revolves around a desire to examine the factors that contributed to the electoral meltdown of the Conservative Party in the 1997 election. The project revolves around attempting to substantiate the following hypothesis: that under the leadership of John Major the Conservative Party lost the characteristics of a party of government. The project will seek to answer this question by firstly looking at the relationship between the Conservative Party and the electorate in terms of explaining the excellent record that the party has in post-war electoral politics, and will then proceed to outline Philip Norton's 'party of government' model (which shall be used as a framework for this project) on a theoretical basis, consisting of four components: governing competence, party unity, strong leadership and public service. Norton argues that electoral success is likely if a political party successfully obtains and maintains all of these components. ...read more.

on two occasions in 1945 and 1966 but for the other three election results, Labour's majorities were minute. Whereas, the Conservative Party has managed to do gain 'real' victories on all eight occasions it has won elections, even succeeding in managing to gain majorities over or near 100 on three occasions. Therefore, on examination of the electoral results in the 1945- 1992 period, it is evident that the Conservative Party has dominated the British political system for most of that time, reflecting their popularity with the electorate and giving weight to the view that they are the 'natural party of government'. The Party of Government Model. The 'party of government' model consists of four components: governing competence, party unity, strong leadership and public service. This model was put forward by Philip Norton has attempted to argue that electoral success depends on whether a political party has obtained each and every one of its four characteristics, whilst successfully demonstrating this to the electorate at the same time. ...read more.

Past evidence has shown that if a party, or its individual members, fail to put the public interest before their own, this contributes to electoral unpopularity. Having outlined the 'party of government' model, it is now possible to proceed to use this theory as a framework to analyse the Conservative government of 1992- 1997 and attempt to argue that it had lost the characteristics of a 'party of government' in 1997, thus leading to the electoral meltdown in the 1997 election. Plan for the governing competence section. State the traditional view on the Conservative Party as the party of economic competence. Major's economic policy. * Manifesto promises (low inflation and low taxation through ERM). What went wrong? * Collapse of UK membership of ERM. * Poor handling of the crisis and the actual crash itself = deficit = * Rise in taxation. However, rise of economic prosperity in 1995+. Why did the CP not benefit from this? If we look at Sanders model- 5 components for economic competence. * Major re-obtained four- but not the media support. Leads to discussion of the subjective economy- perception. ...read more.