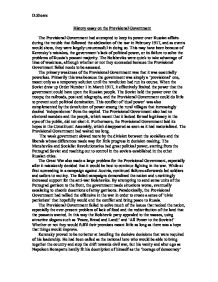 By attempting to send some units of the Petrograd garrison to the front, the government made situations worse, eventually escalating to chaotic desertions of army garrisons. Paradoxically, the Provisional Government had rallied the offensive in the war in order to create a sense of 'civic patriotism' that hopefully would end the conflict and bring peace to Russia. The Provisional Government failed to solve much of the issues that racked the nation, especially the ever-present problem of lack of food and the redistribution of the land that the peasants wanted. In this way the Bolshevik party appealed to the masses, using attractive slogans such as 'Peace, Bread and Land!' and 'All Power to the Soviets!' Whether or not they would fulfil their promises meant little as long as there was a hope that things would improve. Kerensky proved to be no better at handling the decisive decisions that were required of his leadership. He had been called as the national hero who would be able to bring together the country and stop the drift towards civil war, but his vanity and alter ego as Napoleon Bonaparte hardly fit his description of himself as the 'hostage of democracy' that he was sometimes called. ...read more.