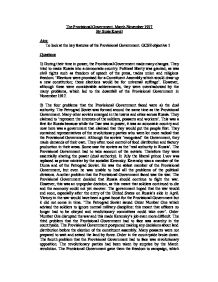 7) When Lenin was young nothing showed that he would become a future rebel except perhaps his turn to atheism. Also he had two blows during adolescence. One was that his father had been threatened with premature retirement by a reactionary government that had feared the spread of public education. The second was that his beloved elder brother had been hanged for conspiring with a revolutionary terrorist group that plotted to assassinate the Emperor Alexander 111. Now he was the male head of the family, which was stigmatised of having reared a `state criminal'. He went to university to study law but was expelled three months later because it was thought that he was participating in an illegal student assembly. He was arrested and sent to his grandfather's estate. In the autumn of 1988 he was permitted to return to Kazan but was denied readmission to the university. During this period of enforced idleness, he met exiled revolutionists of the older generation and avidly read revolutionary political literature. ...read more.