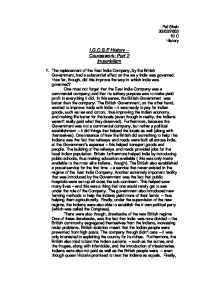 Pal Shah 30/03/2003 10 C History I.G.C.S.E History - Coursework: Part 2 Imperialism 1. The replacement of the East India Company, by the British Government, had a substantial effect on the way India was governed. How far, though, did this improve the way in which India was governed? One must not forget that the East India Company was a commercial company, and that its solitary purpose was to make yield profit in everything it did. In this sense, the British Government was better than the company. The British Government, on the other hand, wanted to improve trade with India - it was ready to pay for Indian goods, such as tea and cotton, thus improving the Indian economy, and making life better for the locals (even though in reality, the Indians weren't really paid what they deserved). ...read more.

Another extremely important facility that was introduced by the Government was the fact that public hospitals were set-up all cross the sub-continent. This helped save many lives - and this was a thing that one would rarely get to see under the rule of the Company. The government also introduced new farming methods to help the Indians yield more of their farms - thus helping them agriculturally. Finally, under the supervision of the new regime, the Indians were also able to establish their own political party (which was called the Congress). There were also though, drawbacks of the new British regime One of these drawbacks, was the fact that India was now divided - the British community segregated themselves from the Indians, increasing racist problems. ...read more.

2. "The Chinese never truly accepted western trade and ideas which were thrust upon them in the nineteenth century." How far is this statement right? The Chinese were "Officially...not much impressed by Western traders. Emperor Ch'ien Lung (1735-1799) wrote to King George III after a trade delegation had arrived in Peking during 1793: "I accept the royal gifts of clocks, guns and telescopes because you have taken so much trouble to bring them to me...But I must point out that there is nothing we lack! We have never set much store on strange or ingenious objects, nor do we need any of your countries manufactures"." This quote goes on to show how several leading Chinese resisted foreign trade. Emperor Ch'ien Lung detested the foreigners and officially gave them only one port (Whampoa) where to trade, initially. There were several reasons why the emperor didn't like and didn't trust. ...read more.