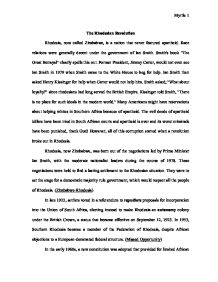 The Rhodesian Revolution Rhodesia, now called Zimbabwe, is a nation that never featured apartheid. Race relations were generally decent under the government of Ian Smith. Smith's book "The Great Betrayal" clearly spells this out. Former President, Jimmy Carter, would not even see Ian Smith in 1979 when Smith came to the White House to beg for help. Ian Smith then asked Henry Kissinger for help when Carter would not help him. Smith asked; "What about loyalty?" since rhodesians had long served the British Empire. Kissinger told Smith, "There is no place for such ideals in the modern world." Many Americans might have reservations about helping whites in Southern Africa because of apartheid. The evil deeds of apartheid killers have been tried in South African courts and apartheid is over and its worst criminals have been punished, thank God! However, all of this corruption started when a revolution broke out in Rhodesia. Rhodesia, now Zimbabwe, was born out of the negotiations led by Prime Minister Ian Smith, with the moderate nationalist leaders during the course of 1978. ...read more.

(McKinely) Britain called the proclamation an act of insurgence but refused to reestablish control by force. "When I was in Rhodesia, we weren't fighting the local Africans; we were fighting Cuban terrorists who infiltrated our country through Mozambique, east of Rhodesia" (Myrtle). When negotiations in 1966 failed to produce an agreement, Britain requested economic sanctions against Rhodesia. On March 1, 1970, Rhodesia formally proclaimed itself a republic. Heightened guerrilla warfare and a withdrawal of South America military in 1976, marked the beginning of the collapse of Smiths eleven years of resistance. (Zimbabwe) Negotiations were restarted in the mid-1970's and in 1971, Britain and Rhodesia reached an agreement that provided African political participation, but without any guarantee of eventual black majority rule. Rhodesian Independence was finally recognized in 1979, the British government resuming control pending elections in February 1980. Rhodesia, now renamed Zimbabwe, finally became an independent nation within the British Commonwealth on April 18 of that year. (Rhodesian Independence) A white Rhodesian who was called for his service during the revolution noted that ...in my youthful mind I appreciated vaguely that something had to be radically wrong with the policies of the Rhodesian Front. ...read more.

(Zimbabwe) Later in 1979, under pressure from Britain, an agreement was reached to provide for a legally independent, democratically governed Zimbabwe. A new constitution was established and a truce was implemented; Britain agreed to finance a voluntary land-redistribution program. The country transmuted to British colonial rule until the transition to self-rule was complete. In the elections of April, 1980, Robert Mugabe's ZANU-PF (Patriotic Front) party won by a comfortable margin, and he became Prime Minister of the Republic of Zimbabwe when independence was achieved on April 18, 1980. "The transition from white government to black government was done relatively peacefully" (Myrtle). Over 25,000 people had been killed in the struggle for independence. As Ian Smith had long predicted, everybody's worst nightmare soon came to pass, the terrorist Mugabe and his ZANU party, through terrorism and intimidation, easily won at the corrupt elections. As a final insult to all Rhodesians, the country officially reverted back to a British colony and raised the Union flag. Apartheid was put to an end, the west ultimately forced it because it was an unfair regime. And within the last 2-3 years Africans have started to take over the white men's lands and kick them out of Zimbabwe. ...read more.