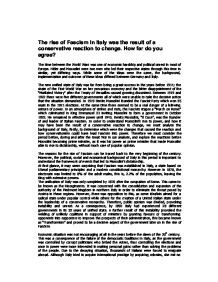 The rise of Fascism in Italy was the result of a conservative reaction to change. How far do you agree?

The rise of Fascism in Italy was the result of a conservative reaction to change. How far do you agree? The time between the World Wars was one of economic hardship and political unrest in most of Europe. Hitler and Mussolini were two men who led their respective states through this time in similar, yet differing ways. While some of the ideas were the same, the background, implementation and outcome of these ideas differed between Germany and Italy. The new unified state of Italy was far from being a great success in the years before 1914; the strain of the First World War on her precarious economy and the bitter disappointment of the "Mutilated Victory" after the Treaty of Versailles caused growing discontent. Between 1919 and 1922 there were five different governments all of which were unable to take the decisive action that the situation demanded. In 1919 Benito Mussolini founded the Fascist Party which won 35 seats in the 1921 elections. At the same time there seemed to be a real danger of a left-wing seizure of power. In an atmosphere of strikes and riots, the Fascists stages a "March on Rome" which culminated in King Emmanuel III inviting Mussolini to form a government in October 1922. He remained in effective power until 1943. Benito Mussolini, "Il Duce", was the founder of and leader of Italian Fascism. ...read more.

As a result, Italy signed the Treaty of London in 1915 and joined the Entente. However, the war proved longer and a more demanding struggle than most conservative interventionists had anticipated. There were huge casualties and the millions of conscripted men, forced out of their native region in order to serve a country whose interests they were only barely aware forged a huge resentment that was accumulated towards the distant governing class and towards the Socialist party and the mainly exempted workers it represented. Difficulties of the same magnitude were to be faced in the post-war years. Firstly, there was enormous dissatisfaction among all sectors of society to the so-called "Mutilated Victory". By not being able to achieve the expected goals after the war, even though Italy was among the victors, it discredited the regime and the political ideas associated with it, in this case, parliamentary and Liberal ones, so the ineffectiveness of the parliamentary politicians was blamed. Therefore, there was much resentment against the weak and unsuccessful foreign policy of the Italian government. An expression of this disappointment came in September 1919 when a band of alien patriots, under the command of Grabriele D'Annunzio, took Fiume, a port on the Dalmatian coast, by force and in defiance of the decision of the Paris Peace Conferences. There was also much economic distress after the war as Italian economy, as of all other European participants in the war, became weak. ...read more.

This made them feel forgotten by the industrial north, which represented the Socialists. Also the fact that much of the industrial workers did not go to the war and weren't driven out of their land as they were because workers were needed for war supplies added to this resentment. This is why much of the Fascist supporters were strong nationalists and ex-servicemen, hence this made the peasants feel more identified with them than with the Socialists and therefore its popularity increased. However, we can also explore the possibility that the Fascist regime was not an entirely conservative option, however, it was regarded as the most feasible conservative alternative to Socialism or Liberal decay. This reinforces the idea of the rise of Fascism as being the result of the Socialist rise, as without this "menace" Fascist ideas as in their pure existence would have been regarded as radical and thus, in case it would have reached power after all, it wouldn't be the results of a conservative reaction to change. In conclusion, the political crisis that was incubated since the unification of Italy and broke out in the post-war years gave rise to radical groups that, because of their lack of complete majoritarian support throughout the country, were overpowered by the Fascist party. The rise of this party was an overreaction to the menace of communism which was seen as too radical for the country by the majority, while Fascism, within its context, was seen as conservative, but when taken from that frame of reference it is observed as radical, as it afterwards proved to be. ...read more.