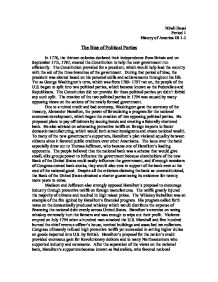 The Rise of Political Parties.

Nirali Desai Period 1 History of America IB 1-2 The Rise of Political Parties In 1776, the thirteen colonies declared their independence from Britain and on September 17th, 1787, created the Constitution to help the new government run efficiently. The Constitution provided for a president, which would help lead the country with the aid of the three branches of the government. During that period of time, the president was elected based on his personal skills and achievements throughout his life. Yet as George Washington's term, which was from 1789- 1797 ran on, the people of the U.S. began to split into two political parties, which became known as the Federalists and Republicans. The Constitution did not provide for these political parties yet didn't forbid any such split. The creation of the two political parties in 1794 was caused by many opposing views on the actions of the newly formed government. Due to a ruined credit and bad economy, Washington gave the secretary of the treasury, Alexander Hamilton, the power of formulating a program for the national economic development, which began the creation of two opposing political parties. ...read more.

Congress ultimately refused high protective tariffs yet succeeded in setting higher duties on goods imported into U.S. by British. Hamilton's proposal for the nation's credit provided enormous gain for Revolutionary debtors and to many Northeasterners who supported industry and commerce. After the separation of the views on the national bank, Hamilton's supporters became known as Federalists, who favored national government. However, Hamilton's proposals also brought resentment to areas that provided few benefits. The southerners, mid-Atlantic region and westerners, all saw the national economic program mostly benefiting the northeasterners and challenged Federalists for control of government by siding with Jefferson's and Madison's Republican party. After the French Revolution in 1789, the French abolishes nobles' privileges, wrote a constitution and bravely fought invading armies from Austria and Prussia. After becoming a republic in September 1792, they claimed war against all monarchs. There was great enthusiasm for pro-French foreign policies in south and west after they went to war against Spain and Britain in 1793 since it would leave the Spain and Britain military too exhausted to continue to aid the Indians and fight for the western lands. ...read more.

Spain also recognized the thirty-first parallel as the United States' southern boundary and dismantled all fortifications on American soil along with discouraging Indian attacks on the western settlers. The foreign policies during this period left the Americans of the nation more deeply divided in 1796 then they had been in 1789. The many adverse views between the people of the United States that were caused by the actions of the government, led to the formation of the Federalist and Republican parties in the early 1790s. The highest majority of Federalists were the Northeasterners who supported trading, manufacturing, and shipping and were in favor of the British while the Republicans mostly consisted of southerners, mid-Atlantics, and westerners who were mostly farmers and favored the French. Events in the late 1780's to the early 1790's such as Hamilton's proposal for the national bank, protective tariffs on foreign manufacturing, French Revolution, and foreign treaties were some of the most considerable events that shaped the split of the two political parties. By the late 1790's, the two political parties were so distinctly separated, that it slowly led to the division of the nation. ...read more.