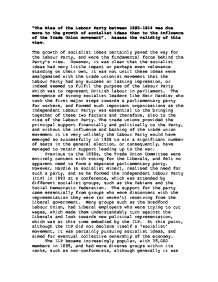 &quot;The Rise of the Labour Party between 1893-1914 was due more to the growth of socialist ideas than to the influence of the Trade Union movement&quot; - Assess the validity of this view.

"The Rise of the Labour Party between 1893-1914 was due more to the growth of socialist ideas than to the influence of the Trade Union movement". Assess the validity of this view. The growth of socialist ideas certainly paved the way for the Labour Party, and were the fundamental force behind the Party's rise. However, it was clear that the socialist ideas had very little impact or perhaps even relevance standing on their own, it was not until these ideas were amalgamated with the trade unionist movement that the Labour Party had any success or lasting impression, or indeed seemed to fulfil the purpose of the Labour Party which was to represent British labour in parliament. The emergence of strong socialist leaders like Keir Hardie; who took the first major steps towards a parliamentary party for workers, and formed such important organisations as the Independent Labour Party; was essential to the bringing together of these two factors and therefore, also to the rise of the Labour Party. The trade unions provided the principal support financially and politically to the Party, and without the influence and backing of the trade union movement it is ...read more.

Trade Unions had begun to demand better working conditions, and generally started to adopt a more socialist stance. The workers and their TU's were increasingly dissatisfied with the Liberals lack of significant social reform and factionalism over what seemed to the them as petty and unimportant issues. The 1899 meeting of the TUC resolved to improve labour representation in parliament, and following this decision, the Labour Representation Committee was set up in 1900 (a union of the two ILP members, two members from the SDF, one member from the Fabians and 7 trade unionists). The fact there were so many more Trade Unionists in the LRC shows their significance, they were generally very important as the LRC was representing more the labour of Britain after all, not British socialists at this point. The next significant boost to the Labour Party came again from the Trade Unionists, after the Taff Vale case had been turned around by the House of Lords to go against the Amalgamated Society of Railway Servants. The Union was forced to pay �23,000 in damages despite their calling off the strike early. ...read more.

Although the Osbourne judgement was essentially reversed in 1913 in the Trade Union Act it still had a significant affect on the Party. The period between 1906 and 1914 was entirely useless though, as although no seats in parliament were gained, in local and by-elections improved greatly and local Labour bodies doubled in members. However, most important was the increased trade union support, with more affiliations from all over the country, totalling over 600,000. Other triumphs were also due to the trade union movement, such as the conversion from the liberals of miners in 1909, showing apart from anything else that the Labour Party's fundamental socialist ideas had seeped into the young minds. The trade unions in this period were vital to the Labour Party's rise, they provided the essential needs of the Party, financial support and numbers of members without these affiliations running up to 1914, the Labour Party would have possibly even fizzled out (like the Liberals). The socialist ideas which started the Labour Party were not enough to carry it through to 1914. The support of the trade union movement was vital to its rise and eventual success later on. ...read more.