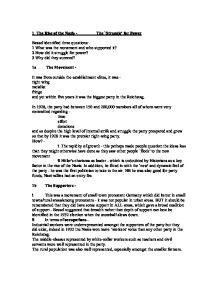 The Rise of the Nazis - The `Struggle' for Power.

1 The Rise of the Nazis - The `Struggle' for Power Bessel identified three questions: 1 What was the movement and who supported it? 2 How did it struggle for power? 3 Why did they succeed? 1a The Movement - It was from outside the establishment elites, it was - right wing racialist fringe and yet within five years it was the biggest party in the Reichstag. In 1928, the party had between 150 and 200,000 members all of whom were very committed regarding - time effort donations and so despite the high level of internal strife and struggle the party prospered and grew so that by 1928 it was the premier right-wing party. How? - i The rapidity of growth - this perhaps made people question the ideas less than they might otherwise have done as they saw other people `flock' to the new movement ii Hitler's charisma as leader - which is undoubted by Historians as a key factor in the rise of the Nazis. ...read more.

The rural population was also well represented, especially amongst the smaller farmers. iii In terms of religion, many of the leaders were Catholic but, in general, the Nazis did better among protestants - in comparison, Catholics were underrepresented although they did have more Catholic voters than the Zentrum! iv Age - the propaganda machine made the Nazis out to be a dynamic party and thus the party of youth although they also did well among OAPs. v Gender - this was very much a male party in terms of leaders and voters, yet by 1932 it was still getting more female votes than any other and by this time more and more female voters were moving towards the NSDAP. So, it can be seen that although the party did have particular areas of support and also some particular areas of opposition in German society, one of the keys to its success can be identified as its unique ability to transcend the sectional divides in that society. ...read more.

NB by 1930 the DDP was getting only 1% of the popular vote (1920 - 20%) and the political bankruptcy of the established parties by 1930 only helped the rise of the Nazis. Indeed the problems of the Weimar regime created an opening for the Nazis to - a) exploit those problems further b) gather further support c) come to power and create a dictatorship. Bessel did not mention the political `left' - NB but you should not ignore this angle - he suggested that it was what happened in the centre and right that was significant. He saw the `left' as deeply divided, he stated that the SPD represented the respectable working-class and that they looked down on the KPD whom he described as the party of high crime and illegitimacy. He added that the `left' also lacked any real power base in Germany at this time - money arms and the Establishment were always hard to attract to their side. ...read more.