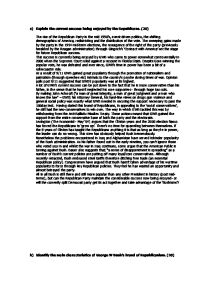 The rise of the Republican Party.

a) Explain the current success being enjoyed by the Republicans. (20) The rise of the Republican Party in the mid 1990's, event driven politics, the shifting demographics of America, redistricting and the distribution of the vote. The sweeping gains made by the party in the 1994 mid-term elections, the resurgence of the right of the party (previously heralded by the Reagan administration) through Gingrich's 'Contract with America' set the stage for future Republican success. This success is currently being enjoyed by GWB who came to power somewhat controversially in 2000 when the Supreme Court ruled against a recount in Florida State. Despite Gore winning the popular vote, he was defeated and ever since, GWB's time in power has been a bit of a rollercoaster ride. As a result of 9/11 GWB gained great popularity through the promotion of nationalism and patriotism (through speeches etc) intrinsic to the country's psyche during times of war. Opinion polls post 9/11 suggested that GWB's popularity was at its highest. A lot of GWB's current success can be put down to the fact that he is more conservative than his father, in the sense that he hasn't neglected his core supporters - through huge tax cuts. ...read more.

Nonetheless the problems encountered in Iraq and Afghanistan have served to hinder popularity of the Bush administration. As his father found out in the early nineties, you can't ignore those who voted you in and whilst the war in Iraq continues, some argue that the American Public is turning against Bush. Bauer also suggests that, "a sense of disappointment is spreading" as a number of Bush's current policies are putting off many loyal/core conservatives. Although recently retracted, Bush embraced steel tariffs therefore ditching free trade (an essential Republican policy). Congressmen have argued that Bush hasn't taken advantage of his wartime popularity to force through key Republican policies. They feel he has wasted an opportunity and almost betrayed the party. All in all Bush is still there and still more popular than any other President in history (post mid-terms), but can the Republican Party maintain the considerable success now being enjoyed - or will the currently split Democrat party get its act together and take advantage of the 'Bushisms'? b) Identify the main characteristics of George W Bush's brand of Republicanism. ...read more.

Bush has enhanced his reputation in Washington and his popularity throughout America (largely thanks to his sure-footed response to 9/11). This combined with the fact that he has not totally abandoned his traditional right-wing principles; concerning tax cuts, the effects of making the social conservative John Ashcroft Attorney General, his withdrawal from the ABM treaty, and his expensive and time consuming fight to ban cloning, plus the fact that he is more conservative than his father was (possibly even Reagan); means that it is not all doom and gloom for core supporters. In conclusion, GWBs policies are somewhat "exceptionalist, increasing his appeal to the red states, while reducing it in blue ones". Although it seems GWB has followed both a 'compassionate' and a 'neo'-conservative line during his time in power, which I feel has made it difficult to pin down his exact brand of politics/republicanism. Michael Barone describes GWB's Republicanism as "A combination of both national greatness and leave-us-alone conservatism". I believe that the Republican Party has become GWBs' party to a greater extent than it has been any one leader's party for a century. ...read more.