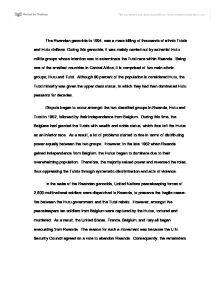 The Rwandan genocide in 1994, was a mass killing of thousands of ethnic Tutsis and Hutu civilians. During this genocide, it was mainly carried out by extremist Hutu militia groups whose intention was to exterminate the Tutsi race within Rwanda. Being one of the smallest countries in Central Africa, it is comprised of two main ethnic groups; Hutu and Tutsi. Although 90 percent of the population is considered Hutu, the Tutsi minority was given the upper class status, in which they had then dominated Hutu peasants for decades. Dispute began to occur amongst the two classified groups in Rwanda, Hutu and Tutsi in 1962, followed by their independence from Belgium. ...read more.

In the wake of the Rwandan genocide, United Nations peacekeeping forces of 2,500 multinational soldiers were dispatched to Rwanda, to preserve the fragile cease-fire between the Hutu government and the Tutsi rebels. However, amongst the peacekeepers ten soldiers from Belgium were captured by the Hutus, tortured and murdered. As a result, the United States, France, Belgium, and Italy all began evacuating from Rwanda. The reason for such a movement was because the U.N. Security Council agreed on a vote to abandon Rwanda. Consequently, the remainders of the U.N. peacekeeping troops were pulled out, leaving behind a tiny force of about 200 soldiers for the entire country. ...read more.

Exclusive footages of what was occurring during this horrific time period, were broadcasted to aware other nations of what was happening. None the less, the Red Cross was able to arrange a camp for orphans and for those who were injured. Also, the organization provided significant information to the United Nations, such as the total body count. Throughout the genocide period, those who had families in Rwanda undertook more action than those in other parts of the world. More so, when the tragic news was reported throughout the media, people all over the nation still continued with their daily lives, partially because many have felt helpless not being able to assist in that part of the world . In the end, over one-tenth of the Rwandan population (800,000 people) had been killed. ?? ?? ?? ?? ...read more.