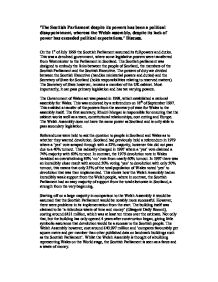 The Scottish Parliament despite its powers has been a political disappointment, whereas the Welsh assembly, despite its lack of power has exceeded political expectations.' Discuss.

'The Scottish Parliament despite its powers has been a political disappointment, whereas the Welsh assembly, despite its lack of power has exceeded political expectations.' Discuss. On the 1st of July 1999 the Scottish Parliament assumed its full powers and duties. This was a devolved government, where some legislative powers were transferred from Westminster to the Parliament in Scotland. The Scottish parliament was designed to embody the links between the people of Scotland, the members of the Scottish Parliament and the Scottish Executive. The powers of duty are divided between the Scottish Executive (handles ministerial powers and duties) and the Secretary of State for Scotland (holds responsibilities relating to reserved matters). The Secretary of State however, remains a member of the UK cabinet. Most importantly, it can pass primary legislation and has tax varying powers. The Government of Wales act was passed in 1998, which established a national assembly for Wales. This was endorsed by a referendum on 18th of September 1997. This enabled a transfer of the powers from the secretary of state for Wales to the assembly itself. The first secretary, Rhodri Morgan is responsible for ensuring that the cabinet works well as a team, constitutional relationships, cost cutting and Europe. ...read more.

Unrealistic expectations of the difference between a centre left government in Scotland and also in Westminster are what has possibly been the most important disappointment. In comparison to this, the Welsh Assembly, despite having limited legislative powers has passed 911 statutory instruments of it's own. This is a big difference from the measly 76 from Scotland. However, due to the nature of the Assembly, the legislative passed does not give the most radical changes, such as the reintroduction of free milk for schools, although the Welsh people see it as reinforcing that the Assembly does work and does provide with changes, however small. This is important when you consider that only about a quarter of Welsh people were in favour of the Assembly to begin with. Where the media were seen to gradually portray the Welsh Assembly as a limited yet effective force, the Scottish Parliament, who was more actively involved in the media, was seen to be a failed experiment. Every small failing was blown out of proportion, University Fee's was recorded as being a bigger disagreement than it was leading to distrust from the Scottish people. The Welsh Assembly, attracting little media attention was given a more positive spin from the press. ...read more.

In conclusion, I think that the point has become clear throughout the assessment of the Welsh Assembly and the Scottish Parliament, that both establishments have had failures and successes of their own. However, it can be argued to some extent that the Scottish Parliament has been labelled a political disappointments whilst the Welsh Assembly is seen to have exceeded expectations due to the feelings from both of the country towards devolution; and how that establishment has performed since then. The Welsh Assembly began with very little support and the Welsh people were pleasantly surprised when it started passing a great amount of legislation, whereas there was an outcry for Scottish devolution and although legislation was passed, it wasn't in the leagues and to the effect that it was expected to be. Due to this I think that I agree with the initial statement, even though both establishments had a lot of problems through both leadership and failings in the first few years. I think that the Scottish Parliament simply needs more time to assert itself as an effective devolved institution, then it will be more obvious to people of the actual limits of the Welsh Assembly. ...read more.