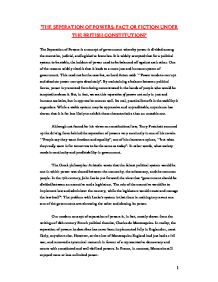 'THE SEPERATION OF POWERS: FACT OR FICTION UNDER THE BRITISH CONSTITUTION?'

'THE SEPERATION OF POWERS: FACT OR FICTION UNDER THE BRITISH CONSTITUTION?' The Separation of Powers is a concept of government whereby power is divided among the executive, judicial, and legislative branches. It is widely accepted that for a political system to be stable, the holders of power need to be balanced off against each other. One of the reasons widely cited is that it leads to a more just and humane system of government. This need not be the case but, as Lord Acton said: ``Power tends to corrupt and absolute power corrupts absolutely''. By maintaining a balance between political forces, power is prevented from being concentrated in the hands of people who would be tempted to abuse it. But, in fact, we see this separation of powers not only in just and humane societies, but in oppressive ones as well. Its real, practical benefit is the stability it engenders. While a stable system may be oppressive and unpredictable, experience has shown that it is far less likely to exhibit these characteristics than an unstable one. Although not famed for his views on constitutional law, Terry Pratchett summed up the driving force behind the separation of powers very succinctly in one of his novels. ...read more.

The situation isn't entirely hopeless. Government will not be able to introduce the legislation it desires in the form that it wishes. Governments are sometimes defeated by their own back-benchers, or by the House of Lords. However, where the Government really wants to introduce a fundamental piece of legislation, it can make it an issue of confidence. The threat that the Government may have to resign, and thus bring about a dissolution of Parliament, is usually enough to get even the most reluctant back-bencher to go with the majority. THE LORD CHANCELLOR There are further problems with the separation of powers between the executive and the judiciary, although these are less troublesome in practice than they could be. Surprisingly, the appointment of the judiciary is entirely in the hands of the executive. The head of the judiciary, the Lord Chancellor, is a Cabinet minister selected by the Prime Minister. The Lord Chancellor either appoints, or advises on the appointment of, all other judges (notionally the sovereign is responsible for the appointment of judges, but in practice this is a formality). However, senior judges, once appointed, cannot be removed from office at the whim of the executive - unlike the Lord Chancellor himself - so there is a measure of independence after appointment. ...read more.

The executive exercises legislative powers by dominating Parliament. It exercises judicial responsibilities whenever an administrator exercises discretion to decide in favour of, say, one planning application rather than another. The judiciary creates law, subtly, and with circumspection. Who is to say that they are not bias being of certain race, class and social backgrounds. Parliament is able to discipline and hold to account its members, without the involvement of the courts. And so on. It should be clear that our system of government is a long way from Montesquieu's ideal. What is most surprising, however, is that it works as well as it does. Ultimately, I believe, it is the acceptance of constitutional conventions that keeps our country going. The Government could, for example, further dominate Parliament but, on the whole, it does not. Parliament could legally enact legislation that transfers the power to decide disputes away from the courts and more to administrators, but it does not. Judges could make radical changes to the law rather than incremental ones but, on the whole, they don't. And so on. The UK doesn't have a written constitution that sets out the balance and separation of powers so, ultimately, it is convention that controls these things. And convention works because everyone wants tomorrow to be the same as today. 1 [2000] 2 AC 115 ?? ?? ?? ?? 1 ...read more.