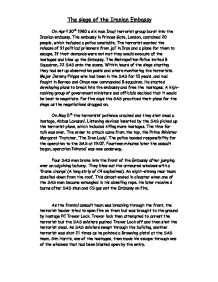 The siege of the Iranian Embassy

The siege of the Iranian Embassy On April 30th 1980 a six man Iraqi terrorist group burst into the Iranian embassy. The embassy in Princes Gate, London, contained 20 people, which included a police constable. The terrorist wanted the release of 91 political prisoners from jail in Iran and a plane for them to escape. If their demands were not met they would execute all the hostages and blow up the Embassy. The Metropolitan Police invited B Squadron, 22 SAS onto the scene. Within hours of the siege starting they had set up observation posts and where monitoring the terrorists. Major Jeremy Phipps who had been in the SAS for 15 years, and had fought in Borneo and Oman now commanded B squadron. He started developing plans to break into the embassy and free the hostages. A high-ranking group of government ministers and officials decided that it would be best to negotiate. For five days the SAS practiced their plans for the siege as the negotiations dragged on. ...read more.

In the Embassy's telex room three terrorists started to shoot the male hostages when they heard gunfire and explosions. One hostage was killed and two others were wounded. As one of the terrorists drew a grenade, he was shot by the first SAS man to enter the room. Another terrorist was then shot. One tried to hide among the hostages, but as the latter were being bundled out of the building he was spotted with a grenade in his hands. An SAS soldier clubbed him to the floor with his Heckle and Koch MP5 and he was then shot 39 times. He was the fourth terrorist to die during the siege; the fifth was shot in the hallway near the front door. He was probably attempting to get outside where he was less likely to be shot in front of the news cameras. The sixth and final terrorist Fowzi Badavi Nejad was more fortunate. He had been guarding the women hostages. The hostages were bound and unceremoniously passed along the chain of SAS men and into the embassy's rear garden. ...read more.

The SAS achieved their objectives: the fact that terrorists died was a by-product. In my opinion the government was justified in the use of the SAS as the hostages were being killed and a quick solution was needed. If the government had not used force more hostages might have died. The demands could have been met but this would leave the door open for further terrorist demands. The SAS had to protect the innocent and they did it. Even though some of the terrorists could have been arrested there was no practical way of doing this without them still being a risk to the hostages and SAS members. 39 bullets is a lot to kill one man, but if fired from more than one soldier in the heat of battle 39 isn't that many. Terrorists are dangerous; they have a single aim and their target has to be met without regard to life or property. Terrorists lose their right to a fair trial when they use innocent people in an attempt to get their demands meet. I believe the actions of the SAS and the fact that they are still active and operational allows people like us to sleep soundly. Bradley Winchle ...read more.