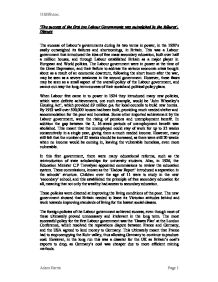 'The success of the first two Labour Governments was out weighed by the failures'. Discuss

'The success of the first two Labour Governments was outweighed by the failures'. Discuss The success of Labour's governments during its two terms in power, in the 1920's easily outweighed its failures and shortcomings, in Britain. This was a Labour government that introduced the idea of free mass secondary education, built over half a million houses, and through Labour established Britain as a major player in European and World politics. The Labour government were in power at the time of the Great Depression, and their failure to address the serious economic crisis bought about as a result of an economic downturn, following the short boom after the war, may be seen as a severe weakness in the second government. However, these flaws may be seen as a small aspect of the overall policy of the Labour government, and cannot out-way the long-term success of their social and political policy plans. When Labour first came in to power in 1924 they introduced many new policies, which were definite achievements, one such example, would be 'John Wheatley's Housing Act', which provided �9 million p.a. for local councils to build new homes. By 1933 well over 500,000 houses had been built, providing much needed shelter and accommodation for the poor and homeless. Some other imported achievement by the Labour government, were the rising of pensions and unemployment benefit. In addition the gap between the 2, 16-week periods of unemployment benefit was abolished. This meant that the unemployed could stay of work for up to 32 weeks consecutively in a single year, giving them a much needed income. ...read more.

The strike had no connection with Labour coming into power and was just bad timing for the new government, but did cause tension between MacDonald and the Trade Unions. Once this strike was resolved, the London Transport workers also went on strike and this led to MacDonald declaring a State of Emergency, and so once the strike was resolved it became very embarrassing for Labour. MacDonald felt betrayed by the union members, because they had caused so much trouble for the union party, but the Trade Unions felt that they had to strike, so as to improve working conditions and pay, and they said that it did not matter whom was in power. With all these problems, and Herbert Asquith, leader of the Liberals, calling for an inquiry in to the Campbell case, MacDonald had had enough, and felt that this inquiry was meant as a vote of no confidence, so he resigned as Prime Minister, shortly after this and without their influential leader, and the emergence of a Communist letter talking about a revolution in England, Labour lost the next election to the Conservatives. Nonetheless they still gained more votes than they had previously had, and were now the main opposition and increasing their number of MP's over the Liberal party, who were now struggling to mount a serious challenge to the government, with less than 1/8 of the MP's in Parliament. In 1929, Labour was re-elected, just 5 years after MacDonald had resigned causing the first Labour government to collapse. ...read more.

With the TUC advising Britain to leave the gold standard, and MacDonald and Snowden ignoring them due to fear of inflation, the May report was implemented by the Bank of England to restore investor confidence. Ultimately this led to a split in the cabinet, and caused MacDonald to make a coalition government, which did eventually drop the gold standard. The labour governments cannot be singled out as either successful or unsuccessful as they came in to power in less than favourable circumstance. Both times they were a minority government, subject to the disagreement of the Liberals and the Tory party. The second term in power, was unduly hard due to the Wall Street Crash, happening in an already crumbling economy. It is therefore necessary to look at the achievements introduced by the Labour government, the way in which they affected Britain. The government improved working conditions, and education for the poorer people of Britain, and it implemented many housing laws, which housed near to a million families, therefore I believe that for the era, with an unchanging Conservative party who were happy with things being left as it was, and a disputing Liberal Party, Labour were as good a choice as any other party, and probably did more for the poorer echelons of British society than the other parties would have, at a time when the poor were particularly vulnerable. The success of the first two Labour Governments was outweighed by the failures. Adam Harris Page 1 ...read more.