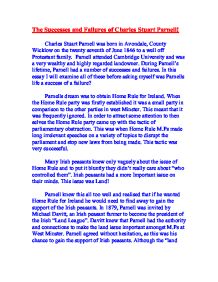 The Successes and Failures of Charles Stuart Parnell!

The Successes and Failures of Charles Stuart Parnell! Charles Stuart Parnell was born in Avondale, County Wicklow on the twenty seventh of June 1846 to a well off Protestant family. Parnell attended Cambridge University and was a very wealthy and highly regarded landowner. During Parnell's lifetime, Parnell had a number of successes and failures. In this essay I will examine all of these before asking myself was Parnells life a success of a failure? Parnells dream was to obtain Home Rule for Ireland. When the Home Rule party was firstly established it was a small party in comparison to the other parties in west Minster. This meant that it was frequently ignored. In order to attract some attention to then selves the Home Rule party came up with the tactic of parliamentary obstruction. This was when Home Rule M.Ps made long irrelevant speeches on a variety of topics to disrupt the parliament and stop new laws from being made. This tactic was very successful. ...read more.

When Parnell returned to his party he soon found that his party was very disorganised and even found that some party members didn't believe whole-heartedly in the Issue of Home Rule for Ireland. As a result of this, he established an organisation known as "The National League". Parnell also tightened his control over Home Rule M.Ps and made all party members agree to the "Party Pledge". This meant that all Home Rule M.Ps at west Minster would always vote together and that any party member who broke the "Party Pledge" would be expected to resign his seat in parliament. Parnell's attempt to unify his party was a great success. In the November 1885 General Election, Parnell won eighty-six seats at Westminster for his party. Parnell found himself in a powerful position as neither the Liberals nor the Conservatives had enough seats to form a Government. Unfortunately for the two British parties they were both against Home Rule and neither of them were willing to form a co-alition with the Home Rule Party. ...read more.

When the scandal was exposed, the Home Rule Party asked Parnell to resign as leader and to get Home Rule for Ireland. After years of trying to unify his party, Parnell managed to split it in two, for and against Parnell. Parnell's image was destroyed, but yet he continued to struggle and would not consider resigning. He was determined to make his dream of Home Rule for Ireland come true. He spent many months arguing with Gladstone and the Catholic Church over his position in the Home Rule Party. Finally on October 6th 1891 at the age of forty-five, Parnell's career had exhausted him greatly and the disappointment of not obtaining Home Rule for Ireland ruined him. In concluding, I think that Parnell's successes out weighed his failures. Although Parnell didn't obtain Home Rule for Ireland, he did manage to do a lot of other things for the country. He solved the land crisis and as a result of his protesting a number of improvements were made to the country by the Conservatives. I think Parnell deserves the title "The Uncrowned King of Ireland", as he loved his country enough to die for it. By Emma-Jane Reilly 10E ...read more.