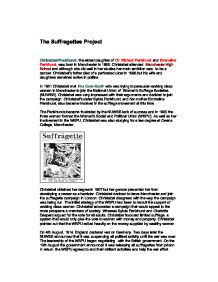 The Suffragettes Project Christabel Pankhurst, the eldest daughter of Dr. Richard Pankhurst and Emmeline Pankhurst, was born in Manchester in 1880. Christabel attended Manchester High School and although she did well in her studies her main ambition was to be a dancer. Christabel's father died of a perforated ulcer in 1898 but his wife and daughters remained active in politics. In 1901 Christabel met Eva Gore-Booth who was trying to persuade working class women in Manchester to join the National Union of Women's Suffrage Societies (NUWSS). Christabel was very impressed with their arguments and decided to join the campaign. Christabel's sister Sylvia Pankhurst, and her mother Emmeline Pankhurst, also became involved in the suffrage movement at this time. The Pankhursts became frustrated by the NUWSS lack of success and in 1903 the three women formed the Women's Social and Political Union (WSPU). As well as her involvement in the WSPU, Christabel was also studying for a law degree at Owens College, Manchester. Christabel obtained her degree in 1907 but her gender prevented her from developing a career as a barrister. Christabel decided to leave Manchester and join the suffragette campaign in London. Christabel disagreed with the way the campaign was being run. The initial strategy of the WSPU had been to recruit the support of working class women. Christabel advocated a campaign that would appeal to the more prosperous members of society. Whereas Sylvia Pankhurst and Charlotte Despard argued for the vote for all adults, Christabel favoured limited suffrage, a system that would only give the vote to women with money and property. ...read more.

The Women's Party also supported: "equal pay for equal work, equal marriage and divorce laws, the same rights over children for both parents, equality of rights and opportunities in public service, and a system of maternity benefits." Christabel and Emmeline had now completely abandoned their earlier socialist beliefs and advocated policies such as the abolition of the trade unions. After the First World War Emmeline spent several years in the USA and Canada lecturing for the National Council for Combating Venereal Disease. When Emmeline returned to Britain in 1925 she joined the Conservative Party and was adopted as one of their candidates in the East End of London. Sylvia Pankhurst, who still held her strong socialist views, was appalled by this decision. Emmeline's was also angry with Sylvia for having an illegitimate baby and refused to see her daughter or grandson. Emmeline Pankhurst died in 1928. Sylvia Pankhurst, the daughter of Dr. Richard Pankhurst and Emmeline Pankhurst, was born in Manchester in 1882. Sylvia had been very close to her father and never really got over his death. Unlike her mother and sister, Sylvia retained the socialist beliefs that had been taught to her by her father when she was a child. Christabel attended Manchester High School and in 1900 won a scholarship to the Royal College of Art in South Kensington. Although a committed artist, Sylvia began spending more and more time working for the Women's Social and Political Union (WSPU) ...read more.

The only group within the party to support and promote women's suffrage was the independent labour party. Negative reaction to the suffrage campaign some leading members of the early labour party were hostile to suffragists were campaigning for equal franchise rather than for universal franchise. Socialists who did not believe in property qualifications were suspicious of the campaign that was led by middle class women who had little in common with, and little apparent interest in, working class men. Indeed some suffragists argued that they should have the vote on the grounds that they were superior to members of the working class. As a result women suffrage was dismissed as a middle class concern or as something that would be achieved as a matter of course once socialism was introduced. Positive reaction to the suffrage campaigns, on the other hand, some leading members of the labour party war close supporters of the suffragists and reacted positively to militancy. Keir Hardie, for example was close to the Pankhursts and supported the militant campaign: according to Sylvia Pankhurst, he collected funds, wrote leaflets, taught the suffragettes parliamentary procedure, introduced them to influential people visited them in prison and even condoned their violent tactics. In 1912 Lansbury proposed that labour MP's vote against the government on all bills until a woman's suffrage bill was passed. He then resigned his seat hoping to gain the backing of local electorate for his pro suffragist stance. Despite, or because of, support in the by-election campaign from the NUWSS and the WSPU, he lost. ...read more.