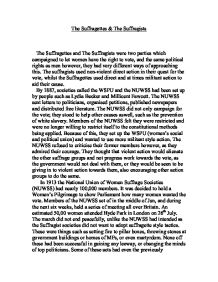 The Suffragettes & The Suffragists The Suffragettes and The Suffragists were two parties which campaigned to let women have the right to vote, and the same political rights as men however, they had very different ways of approaching this. The suffragists used non-violent direct action in their quest for the vote, whilst the Suffragettes used direct and at times militant action to aid their cause. By 1887, societies called the WSPU and the NUWSS had been set up by people such as Lydia Becker and Millicent Fawcett. The NUWSS sent letters to politicians, organised petitions, published newspapers and distributed free literature. The NUWSS did not only campaign for the vote; they stood to help other causes aswell, such as the prevention of white slavery. Members of the NUWSS felt they were restricted and were no longer willing to restrict itself to the constitutional methods being applied. Because of this, they set up the WSPU (women's social and political union) and wanted to use more militant style action. The NUWSS refused to criticise their former members however, as they admired their courage. They thought that violent action would alienate the other suffrage groups and not progress work towards the vote, as the government would not deal with them, or they ...read more.

The government however refused to negotiate. If they were to do so, it would almost certainly encourage others like the suffragettes; to use force and attack them in attempts to gain what they wanted, making the government appear weak. They would have appeared vulnerable giving in to any forceful request, despite however strongly the country or other political sections opposed it. Added to Parliament's problems there was much unrest in the industrial sector with strikes taking place and the low price factories were receiving for their products. There was also the Irish Home Rule campaign in which, the Irish demanded that their country should be handed back to them from the English. Many politicians were divided on whether to give women the vote. This was not the simple issue of granting them the right to do so or not, but who the women would vote for and the fact that many men and classes who could not vote. If certain women of a certain status were given the vote, the likelihood was that they would vote for different parties, while each party had a different reason for granting different groups the vote. ...read more.

Women had also set up their own organisations such as the WRNS (women's royal navy service) as well as the Women's Royal Air Force. These organisations were undertaking dangerous work, but were doing the jobs that were vital in the allies winning the war. This was the major factor in changing public view on the abilities of women and their claim to equal rights. Their work was essential and Asquith acknowledged this: "When the war comes to an end, have not the women a special claim to be heard on the many questions which will arise affecting their interests? I say quite frankly I cannot deny that claim. However, the effort by the women of Britain was highlighted more so by the Bolshevik revolution in Russia, led by Lenin. During this, the working classes had revolting against the government and had taken control of the country. The English government did not want a repeat of these scenes and so they granted a change in the electoral system. The register was changed due to this and the fact only about one in five soldiers lived at their old addresses. The lower working classes and women had been granted the vote after the war for the first time, due to their efforts. ...read more.